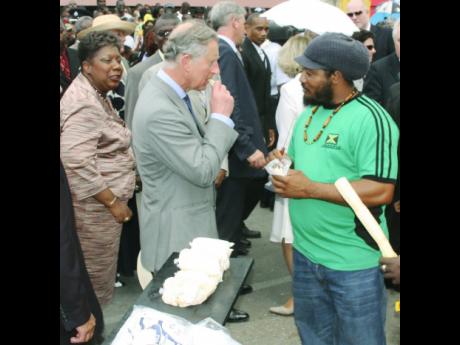 Prince Charles samples a piece of sugarcane given to him by Falmouth-based vendor Carlos Morgan (right) during his 2008 visit to Jamaica. 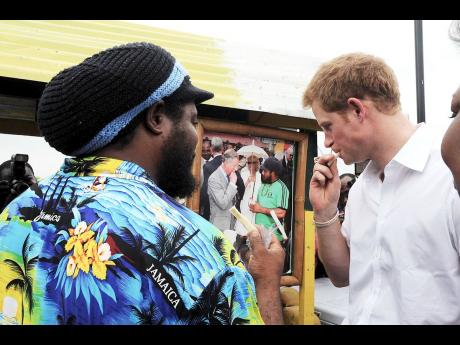 Vendor Carlos Morgan (left) of Falmouth, Trelawny, shows Harry a photograph he took with his father, Prince Charles, as he ate a piece of the sweet treat during a 2008 visit to the town. 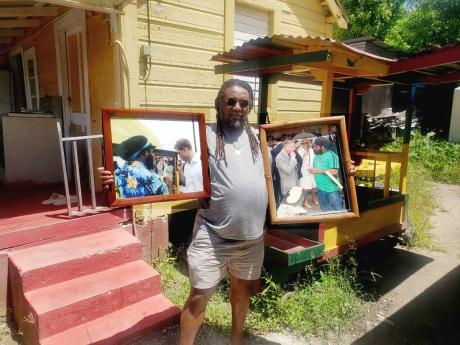 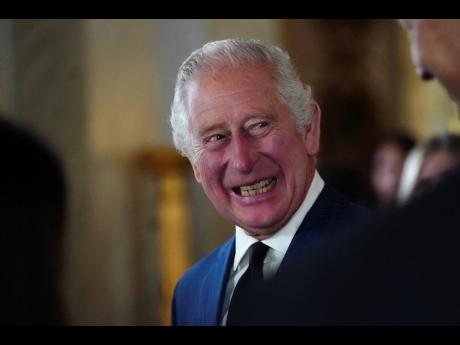 Falmouth resident Carlos Morgan considers King Charles his 'brethren'. Morgan, who met Prince Charles and his wife Camila in 2008, said that based on his interactions with the then Prince of Wales, he thinks the designation is appropriate.

"I call him brethren because when he came to me he didn't ask my name. He greeted 'by [saying] Hello Carlos'. For him to greet me like that, he must be a brethren. We chatted in a relaxed form," Morgan, a rastafarian, said.

The conversation to which he referred took place while Charles chewed on a piece of sugarcane in the middle of Falmouth. Morgan, fruit vendor, was selected to interact with the prince and his wife when they visited the historic town.

"Look how many hundreds of people were there and he chose to be photographed with me. It wasn't by chance though. Then Ambassador Aloun Assamba arranged it all. When his son, Harry, visited he, told his son to visit me. That is the action of a brethren," Morgan said.

Although the encounter with Charles took place 14 years ago, Morgan said it is fresh in his mind.

"It is like it happened yesterday. The prince and I chatted and discussed Falmouth. During this time, I peeled a piece of the sweetest ribbon cane and gave it to him. He ate it without being told how to handle it. Cameras were just clicking to record the historic event," said Morgan.

"The pride of the moment still lingers. I have often boasted about being the only man to be photographed with the prince while holding my sharp knife. Not even his chef has that luck," Morgan chirped.

The Trelawny fruit vendor also gave sugarcane to Harry, Charles' second son, when he visited as part of Queen Elizabeth II's Diamond Jubilee celebrations in 2012. However, he was not so fortunate to meet William, the new prince of England, who visited Jamaica with his wife, Kate, in March. The queen died last Thursday, aged 96. She had the longest reign of any British monarch. Charles has succeeded her on the throne, while William has ascended to the rank of prince.

Morgan said he was not surprised to hear of the queen's passing due to her age.

"I saw it coming and I told myself time come now for my brethren to become King," the popular coconut vendor said.

He told THE STAR that if he were to speak to the newly crowned King of England today, he would make a simple requests of him.

"I would say to him, 'you visited me in my neck of the woods, so arrange a visit for me to visit you in Buckingham Palace. After the visit to the palace, I want want to get two tickets for us to go watch Liverpool beat any Premier League side. That would live with me till death,' " Carlos said with joyous anticipation in his eyes.

"I would want to visit Buchanan Palace because of the history that surrounds it. Not many get a chance to visit there. Can you imagine the headlines, 'Jamaican Rastaman invited by King Charles to Buchanan Palace.'? We might even have a cup of tea together. [It would be] "truly historic and one the books would record", Morgan said.

The avid Liverpool fan said, also, that it would mean the world to him if he got the chance to sit with King Charles at Anfield and watch his beloved team demolish any Premier League rival.

"Years ago I travelled throughout Jamaica supporting Village United with my big red flag. The television camera would pick me up in the stands. When I went to other matches spectators would say, 'A da rastaman deh mi si pon TV'. I have been a Liverpool supporter since 1985. Can you imagine me sitting in the stands, waving my big flag, sitting beside the King? I would be on television all over the world, including Africa. It would bring joy untold," Morgan said.