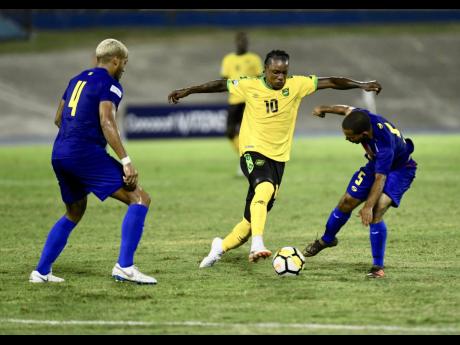 File Jamaica striker Darren Mattocks (centre) weaves his way between Tyler Lee (left) and Jermaine Wilson, of the Cayman Islands, during a Concacaf Nations League game at the National Stadium on Sunday, September 9, 2018. 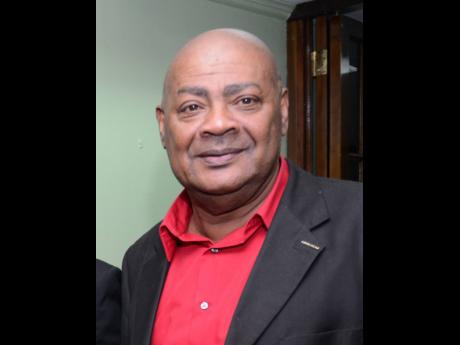 Jamaica Football Federation (JFF) president Michael Ricketts said the association's stance against skin bleaching has nothing to do with the omission of striker Darren Mattocks from the Reggae Boyz team ahead of their Concacaf Nations League matches.

The Reggae Boyz are scheduled to face Antigua and Barbuda on September 6 at the Montego Bay Sports Complex before playing away against Guyana three days later.

The issue of skin bleaching recently came to light in July at the Concacaf Gold Cup in the United States with heightened discussion over Mattocks, whose complexion has dramatically changed in the past year.

Ricketts, who told STAR Sports that his federation does not condone skin bleaching, said Mattocks' exclusion was purely on footballing basics.

"I am not surprised that he was not selected based on my personal assessment, and I don't think he is on top of his game right now and they are other forwards that are doing better than him now."

Mattocks, who currently plies his trade for FC Cincinnati in Major League Soccer, has had a poor season for the club so far, where he has netted two goals in 13 appearances this season. However, he has scored 18 goals in 49 caps for the Reggae Boyz so far in his career.

Ricketts underlines despite his omission from the team, that Mattocks, who celebrated his 29th birthday yesterday, is still part of the JFF's plans going forward.

"I am sure that Mattocks' career will not be over because he still has a contribution to make, but I think that there are other forwards that are probably in better shape and condition and in better form than he is in right now," Ricketts said.