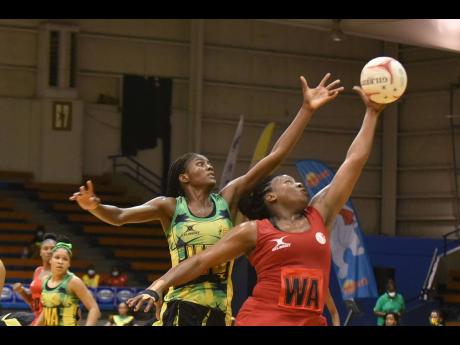 Sunshine Girls wing defence Kadijah Williams (left) goes up for the ball against Trinidad and Tobago’s wing attack Crystal-Ann George during the opening ‘Test’ of the Sunshine Series at the National Indoor Sports Centre in St Andrew last Saturday. 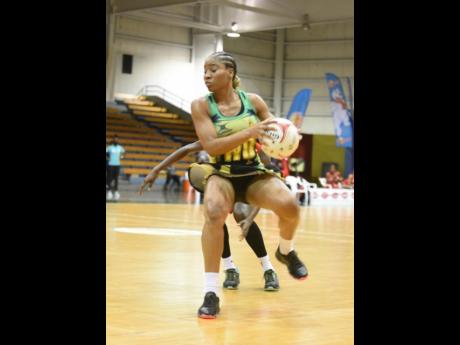 Sunshine Girl Shadian Hemmings in action against Trinidad and Tobago during the first match of the Sunshine Series at the National Indoor Sports Centre last Saturday.
1
2

After copping the team's Most Valuable Player (MVP) award in the opening match, Sunshine Girls defender Shadian Hemmings says she is looking to put on another top class performance when the Sunshine Girls face Trinidad and Tobago in game two of the best-of-three Sunshine Series today.

The match will be played at the National Indoor Sports Complex starting at 6 p.m. The Sunshine Girls, who are ranked fourth in the world, six places above Trinidad and Tobago, outclassed the visitors 71-22 in the opening match on Saturday at the same venue.

Hemmings, 30, who plays wing defence, tormented the Trinidadian attackers throughout the match with several key interceptions. In fact, the defensive unit which also includes Shamera Sterling and Latania Wilson, played brilliantly in the final two quarters as they held the visitors to just six points in the last 30 minutes of play.

She told STAR Sports that she has worked very hard on her game and she is now happy that it is starting to bear fruit.

"You can expect the same top performance from me because I have never gone into a game expecting to win the MVP, I go out there to work hard for the team but if the MVP comes again then it comes as the aim is to win the game," said Hemmings.

"The team is confident because Trinidad are not up to our standard and so it is basically practice for us and we just need to go out there and stamp our class, minimise the mistakes and just do the things that we need to do to win games against the big guns in the world.

"Based on the last game, the turnovers and missed shots percentages were a bit high and we definitely have to minimise those mistakes so that when we get to the bigger teams these things don't affect us," Hemmings said.

She pointed out that head coach Connie Francis has instilled a lot of confidence in her and therefore her game has improved a lot over the past few years.

"I am feeling good going into this game, but I just need to just step up my intensity a lot more. The coach always comes down hard on us in everything that we do, especially me, knowing that I am a defender and so I just want to make her proud," said the former Herbert Morrison Technical High School star player.

"I know that she has a lot of confidence in me and that is why I am playing at the level that I am playing right now," she said.