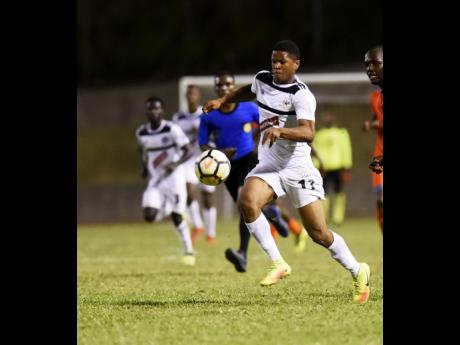 National Under-20 striker Nicque Daley says he is looking forward to the opportunity to lead the Charleston Battery strike force in this season's United Soccer League (USL) in the United States.

The 18-year-old Daley, who netted one goal for Cavalier in this season's Red Stripe Premier League competition, told STAR Sports that this is a great opportunity for him to showcase his talent on the international stage.

"I am feeling excited because this is my first professional contract, and so I am just hoping to go there and do my best for the club," said Daley.

"This is a big thing for me because this can change my life, and I will be able to help my family," he said. "I think this is a good move for me at this age because I am still pretty young."

Daley, who led Clarendon College to last year's daCosta Cup and Olivier Shield titles, has signed a four-year contract with the Battery.

He added that he received a lot of positive feedback from the coaches at the club during his trial stint and is now looking forward to giving of his best when he steps on to the field as he is looking towards playing in Europe in the future.

"I want to score as many goals as possible and to move into the MLS (Major League Soccer) competition and then see if I can reach into Europe," said Daley, who revealed that at the trial, the coaches told him that they were impressed with his general strength and his running on and off the ball.

He will join fellow Jamaican Obrien Woodbine in the Charleston Battery squad.