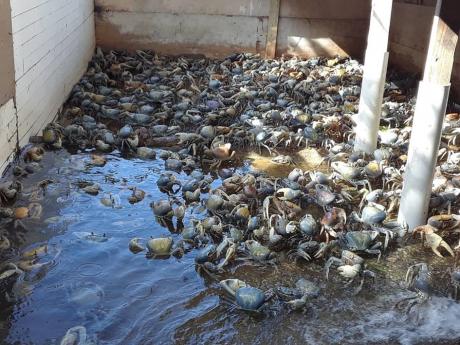 One of the pens at Jermaine Morris’ crab farm.

Jermaine Morris' once lush backyard in Rock, Trelawny, is now the habitat for more than 1,800 crabs, which he has been housing in pens.

The 42-year-old told THE WEEKEND STAR that he has been capturing and raising the crustaceans since 2018, after realising there was a great demand.

"Right now I don't think I will ever have the amount of crab to meet the demand that I am getting. I have to be out hunting like crazy," he said

Morrison said that he was at a crab festival in Trelawny and ran out of the tasty treats, leaving persons disappointed. He immediately decided to abandon his business as a cookshop operator.

"So I decided that the next crab fest I wouldn't run out and that is how the whole idea to harvest them came about," he said. "When the second crab fest came around I decided that I have to meet the demand, and so I started capturing and made the pen to keep them." He now has three pens, two housing males and the other for females.

"When I looked at the amount of crab I had, I decided to start sell on the street and people came in like crazy to order crab. People find me to purchase or they will call me over the phone and I drop it off at a location. Me also cook and sell right on the streetside," he said. Morris noted that his prices vary based on the customers' needs.

"I've been hunting crab since I was a little boy. There was a man in my community name Crab Curlo and (another named) Sasa. I use to always follow them around to crab bush. From that I realise it's like a hobby for me. Even though sometimes them hard to catch, I don't let it bother me," he said.

Morris said the crustaceans require much attention like any other animal that is reared.

"I have to make sure that inside their pens are cool. Their water has to be changed every day and the pen cleaned every morning. My crabs are the cleanest on the earth because I take good care of them and feed them well. They eat fruits, vegetable and bush," he said.

He hunts and captures crabs three days a week, and once-a-year he allows them to mate.

"Me good at hunting them and I know where to find them. I barely depend on them mating to keep up the numbers because a baby crab takes like about five years to grow into an adult," he said. "So while the babies are growing me still gwan hunt some ones that can eat."