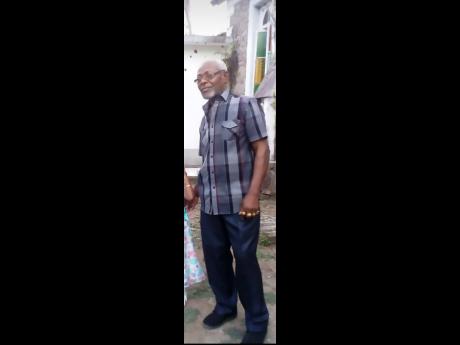 When Amos Adams returned to his hometown of Colonel's Ridge Clarendon in 2013, he did so because he thought it would be more peaceful than Kingston where he had lived for many years.

But in a cruel twist of fate, the 65-year-old businessman was robbed and killed in his community last Saturday.

Adams was murdered and his body left close to his home in Dawkins Land, Colonel's Ridge. He had several chop wounds.

His niece, Shirley Wheeler, 52, said her uncle was a selfless person, who went above and beyond for his community.

"He loved his community. If the community was doing something like keeping a little treat or something for the school and they ask for a donation, he would be willing to give them money for food," she said.

Wheeler said that the family felt betrayed that Adams was killed in the place he loved and thought to be safe.

"I feel upset because him born and grow here, so him feel safe coming back to him hometown," she said. "If anybody come for a piece a bread him give them, so for them to take him life like that, it sad," she said.

She told THE STAR that the community has come to a standstill since the murder.

"Right now, people still cyah believe what happen. Everybody miss him and a try figure it out," she said "We don't know what is gonna happen, God know. Him was a humble and caring man to everybody," she said

Fellow resident Milton Edwards said that persons in the peaceful farming community wept at the news of Adams' murder.

"Mr Adams was a humble, honest, very helpful person, someone you can depend on for assistance, decent human being, very honest in lawful situation. He contributed to the poorer set of people in the community as well as churches and school," he said. "He also operated a business and believe you me, I don't know how he made a profit, because he was so kind."

Edwards was shocked that Adams was killed in his hometown.

"In this community, everybody know each other. But I understand that people are harbouring others so you don't know who is really who," he said.

Head of the Clarendon police, Senior Superintendent Glenford Miller, said no arrest has been made, however, investigations are being done.

He is also appealing to anyone who may have information about Adams murder to contact the Clarendon police.