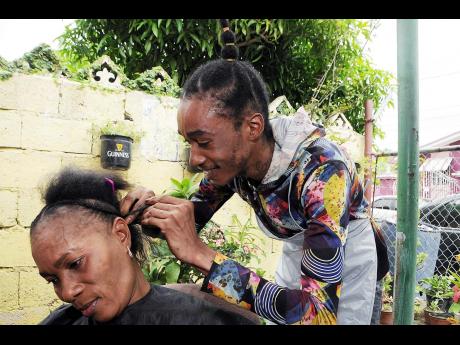 Tevin Brissitt is a certified beautician. The Riverton, St Andrew, resident is a skilled hairdresser and make-up artist. 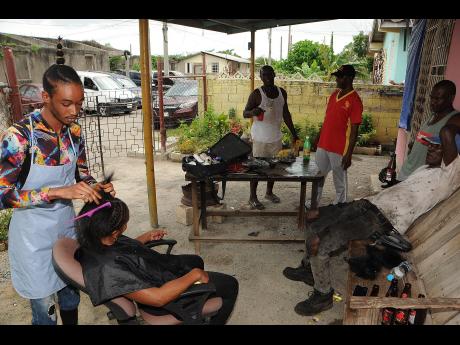 Tevin Brissitt is a certified beautician. The Riverton, St Andrew, resident is a skilled hairdresser and make-up artist.
1
2

You don't see a male hair-dresser every day. The reason for this may be because the cosmetic and beauty sector, with the exception of barbering, is considered to be female territory. However, Tevin Brissett is among those pushing back at any notion that hairdressing in an exclusively female enclave.

"I have been doing hair since mi a 14 years old. A it me use send myself go school, and now it mi a use take care of my family," Brissett, 24, told THE STAR.

During his early teenage years, Brissett said he honed his craft by watching hairdressers intently in his community.

"Mi used to play football, but mi did just love see the hair ting, and so me always watch a woman in the community when she a work. A suh me learn to do nails as well. Afterwards, me just decide to go school, and by age 17, people realise say mi good at what mi do and start pay me," he said.

When the news team visited Brissett in his Riverton City, St Andrew community yesterday, he was busy sewing on a weave for Sharon, one of his most loyal clients.

"It is like any other career. It's an art. I am very talented, so I could do any other thing, but this is what I choose. I am proud of who I am and someday, I would want to have my own salon, but right now the rent ting would beat me because I am not that established," he said.

A certified beautician, Brissett said he aspires to become the best hairdresser in the business.

"The majority of hairdressers in Jamaica are females and this is not the most sought-after trade in the inner city, because even if a lot of men want to do it, they are afraid of the backlash. This, however, gives me an advantage, as there are times when I don't have hands to do hair and make-up," he said.

The hairdresser and make-up artist, who gets the bulk of his customers from Riverton City, Seaview Gardens and Waterhouse, said he has often been on the receiving end of boorish comments. Among other things, he has been labelled as gay.

"Mi nuh care what people say, because I know I am not gay. I didn't make myself, so all when dem say me face look like a girl, mi don't pay them no mind. I love women and them a mi everything. Thing is, I see man bun mi out already and a try style mi, and a mi and him woman deh, so mi no pay dem mind. A my money mi a make," he said.

Brissett hopes to create his own line of beauty products someday. For now, however, his aim is inspire other males to consider hair-dressing as a potential career.