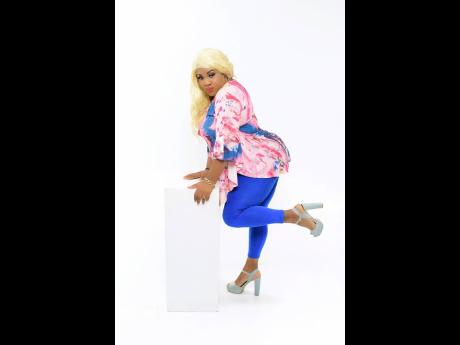 Declaring that she has grown a lot since 2010, when she was embroiled in a much publicised, unsavoury fracas, Gaza Kim said that she is also "free from all bitterness" and ready to ask for blessings for all her colleagues.

This is a particularly exciting time for the former Vybz Kartel/Portmore Empire ingenue, who is on a roll with a new single and continues to embrace her Gaza moniker as she steps into the spotlight.

"Everything that happen to me was supposed to happen or else I wouldn't be the woman that I am today," Gaza Kim told THE WEEKEND STAR.

"I wish many blessings upon all artistes. Yes, Vybz Kartel included. I just pray and hope that things work out well for him. I was carrying around a burden. But from I let it go in 2016, I feel light, even though mi did put on some weight," Gaza Kim added. But there is still a caveat to this forgiveness thing.

"Jesus forgive the people who do all kinds of things to him, so who is me not to forgive? But one thing, I don't forget," she said.

Signed to Killa Imij Records since April, the label produced her single Bubble Up which is living out its name.

"The Killa Imij team, I must say that they are really interested in my career and I feel comfortable working with them. I have always been recording, but people would always ask 'So Kim, how mi nah hear yuh?' But dem a hear mi now. Bubble Up has 500,000 streams on Spotify and my listeners increase as well. I am happy," she said.

Gaza Kim was vocal in shouting out not only her Killa Imij outfit, but also those who have consistently encouraged her not to let go of her dream.

"Family and close friends and especially my mother always tell me that I have an amazing voice and I must use it. So even when the shows were just trickling in, I was always grateful. I have met so many young people who say 'Kim I want to be you.' They see me as a role model and I owe it to all of them to succeed," she shared.

With more than 10,000 monthly listeners on Spotify, Gaza Kim has a goal to spread her tentacles all over social media and maintain a visible presence in the dancehall.