WHAT MAKES IT A VALID CONTRACT? 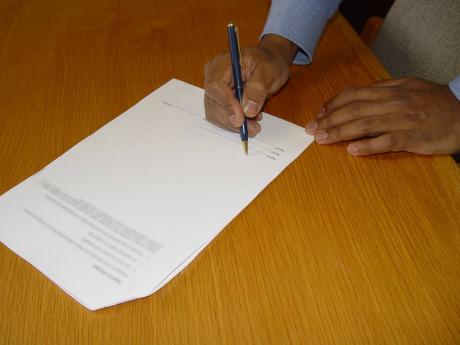 Some contracts, such as the sale of property, must be in writing.

A contract is a legally binding promise made between at least two parties in order to fulfil an obligation in exchange for something of value. Contracts may be formed by the parties signing a written document, which embodies all its terms. However, a contract can also be entirely oral, or it may be partly oral and partly in writing. It must be noted, however, that some contracts must be in writing, for instance, the sale of property.

The elements of a contract are discussed below. We will begin with the 'offer'. An example of an offer being made is one party saying to another, "Can you sell me that pen?"

An agreement happens when an offer is made by one party (the offeror) to another party (offeree). It must be noted, however, that an offer must be capable of being accepted. Using the same example of the pen, if the offeree's answer to the question is 'yes', then that will constitute acceptance.

Ambiguous responses or remaining silent is not generally considered acceptance, unless it is clear that acceptance was intended; for instance, where the offeror does not answer, but instead just pays for the pen.

A third element of a contract is 'consideration'. In the case of a pen, this is the money used to pay after there was an offer and an acceptance. Along with an 'offer' and an 'acceptance', the parties must also exchange something of value in order for the contract to be binding. Although money is the most common means of consideration, it can generally be anything that consist either in some right, interest, profit or benefit to one party, or some forbearance, detriment or lost to the other party.

The rule is that consideration must be sufficient, but need not be adequate. What this means is that the law requires the parties to have entered into a bargain where each side has provided something of value that the courts can see. The courts are not generally interested in whether this is the full market value, or whether the contract is a fair bargain. That is for the parties to negotiate for themselves. Consideration does not have to be adequate or for the benefit of the other person, it merely has to be sufficient (e.g., if someone offers to sell their car, which is valued at $1,000,000 for nothing, then there is no consideration; but if they offer to sell it for $100,000, then there is valid consideration, albeit not the market value.)

For a contract to exist, there must be an intention to create legal relations. The particular requirement is to assess whether the parties to the contract did in fact intend for their agreement to have legal consequences, meaning that it is clear that they intended to enter into a legally binding contract.

In determining whether the parties intended to create legal relations, the court examines whether a reasonable third party would have concluded that the parties intend to have created legal relations. This test will be applied to the facts of the specific case, as a court will objectively examine that party's conduct in determining whether they intended to be legally bound by their promise.

In the case of business agreements, the general assumption is that the parties intended to enter into a contract.

In social situations, that is where it gets a little tricky, as there is generally no intention for agreements to become legally binding contracts. For example, if I promise my son $500 if he sits quietly and watches his tablet, even if he did so there was no intention to create legal relations.

It is up to the person who wants the agreement to be a contract to prove that the parties actually intended to enter into a legally binding contract.

Odane Marston is an attorney-at-law who specialises in conveyancing, administration, probate, recovery of possession, criminal litigation and divorce. He may be contacted via email Odanemarston@gmail.com or star@gleanerjm.com.

This article is for general information purposes only and does not constitute legal advice.