Americans’ World Cup-ending loss seen by 16.5m on US TV 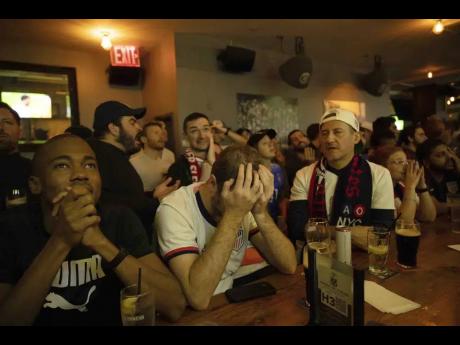 Fans react during a watch party at the Smithfield Hall, New York City, on Saturday, after the Netherlands scored a goal against the United States of America at the World Cup in Qatar. The Netherlands won 3-1.

The United States' tournament-ending 3-1 loss to the Netherlands at the World Cup was seen by 16.5 million on USA English- and Spanish-language television and digital streams, according to figures released by Fox and Telemundo.

Fox said its coverage of the round-of-16 match, which started at 10 a.m. EST on Saturday, was viewed by an average of 12.9 million. That included almost 600,000 on its digital streaming services.

Telemundo said its Spanish-language coverage was seen by 3.58 million, including 1.26 million for its digital streams on Telemundo and Peacock.

Viewers were down from the previous two USA round-of-16 matches, according to figures provided by Nielsen. The 2-1 extra-time loss to Belgium in 2014, which began at 5 p.m. EDT on a Tuesday, was seen by 18.1 million on ESPN and Univision. The 1-0 extra-time loss to Ghana in 2010, which kicked off at 2:30 p.m. EDT on a Saturday, was viewed by 17.9 million on ABC and Univision.

The top US markets for the viewership of the United States-Netherlands match were Cincinnati, with a 10.4 rating and 33 share; Washington, D.C. (9.9/33), Kansas City (9.9/33) and Austin, Texas (9.8/35). The rating is the percentage of television households in a market tuned to a telecast, and the share is the percentage among households with TVs on at the time.

Fox said data from Nielsen on the West Coast markets, which were impacted by the 7 a.m. PST start time, will not be available until later this week.

Telemundo and Peacock are divisions of NBCUniversal, owned by Comcast Corp.