Australia aim for ‘shock’ against Argentina 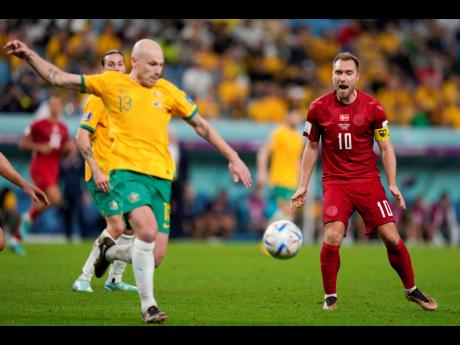 After unexpectedly surviving the World Cup group stage, the Socceroos will once again rely on teamwork, determination and self-belief when they go up against star-studded Argentina in the round of 16.

"We have no real pressure," said forward Mathew Leckie, who scored in a 1-0 win over Denmark. "We just need to enjoy the moment, enjoy the occasion. No one expects us to win. So let's shock the world."

Centre-back Harry Souttar, the man who will be charged with stopping Lionel Messi in Australia's next match, is the tallest outfield player at the World Cup at 6-foot-6 (1.98 metres).

He only recently returned from ACL surgery but his and the team's confidence has been building game after game while advancing from a difficult group featuring defending champion France and European Championship semifinalist Denmark.

"It's 11 against 11. There are not 11 Messis. There is one," right back Milos Degenek said Thursday. "We know their squad is full of stars. Even (Paulo) Dybala is on the bench and (Lautaro) Martinez comes off the bench. So it's a squad that's immaculate.

"I always loved Messi, and I think he's the greatest to ever play the game," Degenek added. "(But) it's not an honour to play against him, because he's just a human, as we all are."

Australia's performance has been a testament to team spirit and proving doubters wrong.

"No one believed in us apart from us and the people around us," Degenek said Thursday. "So it's phenomenal."

It's only the second time in six World Cups that Australia has reached the knockout stage. Eventual champion Italy beat the 2006 team in the round of 16 on a controversial stoppage-time penalty.

Australia only qualified for this tournament following a penalty shootout win over Peru in an intercontinental playoff in June. But planning for the World Cup started long before that.

Degenek left Red Star Belgrade in January for the Columbus Crew in MLS, specifically to get more playing time given the tournament in Qatar.

Duke, who scored with a difficult header in Australia's 1-0 win over Tunisia, once considered becoming an electrician when his football career stalled. Then coach Graham Arnold gave him a chance with Central Coast Mariners and the pair are now reunited with Australia.

"Obviously I've got a lot of faith in the kid," Arnold said. "Everyone talks about where he plays but when he walks over that white line he gives 100% for the nation and the jersey."