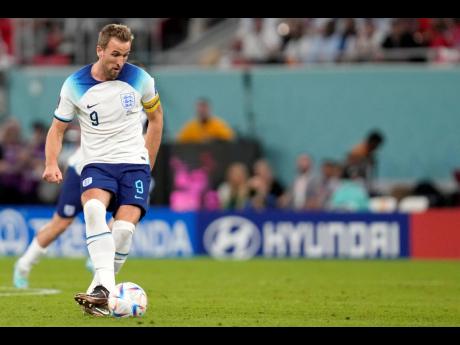 England’s Harry Kane makes a pass during the World Cup Group B football match against Wales, at the Ahmad Bin Ali Stadium in Al Rayyan, Qatar on Tuesday. England won 3-0.

For Harry Kane, the wait for a first goal at this World Cup goes on.

Substituted after 58 minutes of England's 3-0 win against Wales on Tuesday, he embraced his replacement Callum Wilson and made his way to the bench to watch the remainder of the game.

Kane, despite shaking hands with his coach, might not have shared that view.

For a man who is famously reluctant to sit out any opportunity to add to his scoring record, it was likely a frustrating watch from the sidelines at Ahmad Bin Ali Stadium.

Against Wales broken by goals from Marcus Rashford and Phil Foden, Kane was looking to finally get off the mark in Qatar. Instead, Rashford added a third of the match and his third of the tournament.

"He's enjoying his football, but for any forward, you want to be scoring goals," Rashford said.

England scored nine goals as they topped Group B, but none came from their most prolific forward.

Yet Kane, who was the Golden Boot winner at the World Cup in Russia four years ago and is two short of Wayne Rooney's all-time England record of 53 goals, has still made a notable contribution.

Providing the cross for Foden's second-half strike, he became England's first player to register three assists at a World Cup since David Beckham in 2002. He can add to that total when England play Senegal in the round of 16 on Sunday.

England's captain has always been a creator as well as a finisher and his assist statistics in his opening three games -- also setting up goals for Raheem Sterling and Rashford against Iran -- is evidence of just how complete a forward he is.

It also underlines his enduring importance to England.