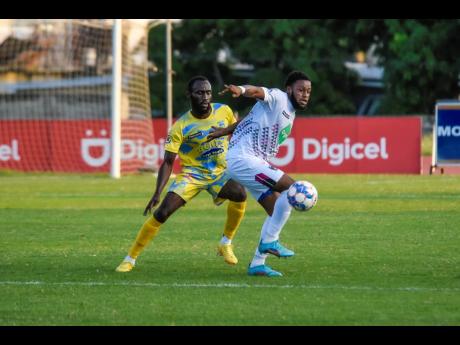 Rohane Brown (right) of Chapelton Maroons turns away from Damion Binns of Waterhouse during Sunday night’s Jamaica Premier League match at the Stadium East field. The Maroons won 1-0 with Brown scoring in the 20th minute.

Those were the ingredients Chapelton Maroons player Rohane Brown said were the reasons that history was made for his club, after their first win in the Jamaican top flight.

Brown's 20th-minute strike was enough for Chapelton to edge Waterhouse 1-0 in their Jamaica Premier League (JPL) game on Monday, getting their first points of the season after a difficult start to life in the JPL.

Before Monday, they had three straight defeats without a goal as their squad continued to operate with a thin bench awaiting their schoolboy football reinforcements. The difficult patches the club endured tested their fortitude, according to Brown, something that he and the team were determined to put right.

"It was frustrating because coach (Lenworth Hyde) pressured us a lot in training," Brown said. The unexpected break caused by the Reggae Girlz international friendly resulted in a rare opportunity for intense training for the game, and Brown said that the team was committed to ensuring that they repaid the trust that Hyde has placed in them.

"It was very hard. We had to wake up 7 a.m. every day to train. We did a lot of running in the hills. We trained very hard Sunday to Sunday every day. So we had to get three points to make our coach feel welcome in the league," Brown said. With Hyde's reputation both at the schoolboy and top flight level, Brown hopes that producing the biggest result of their season to date will boost their confidence for the difficult challenges that still lie ahead.

"It will build our confidence so that when we play the big teams we will be backing ourselves to get points from the games," Brown said.