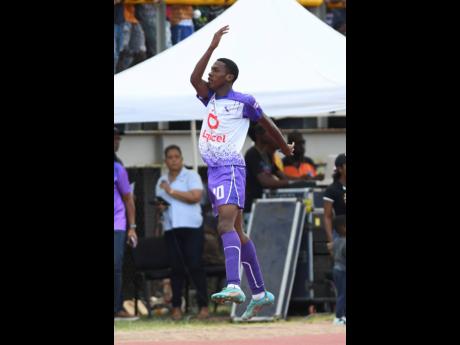 Stopping Kingston College's (KC) Dujuan 'Whisper' Richards has been a problem that has been unsolvable for all the teams they have faced so far.

According to St Andrew Technical High School (STATHS) coach Philip Williams, the focus will not solely be looking to decipher that puzzle, but also on keeping their identity, as they face the defending champions in the ISSA/Manning Cup semifinals this evening at 6:15 at the National Stadium.

It will be a rematch of last season's semi-final where KC prevailed 4-2 on their way to winning the title. Both are coming off ISSA Champions Cup victories over the weekend.

Richards has scored 24 goals in this schoolboy football season and has been difficult to stop, however, Williams is wary of all the other threats that KC possess while they seek to limit Richards.

"We just have to trust in our defensive unit to do that. If you pay too much attention to Richards, there are other players on KC that will hurt you. So it's about playing our game defensively. We are a strong defensive unit and hopefully, our defensive strength will come forward.

"It is going to take a holistic defensive effort from everybody when we don't have the football and when we have the football we try to work together as a team in the offensive stage," Williams told STAR Sports.

Richards came off the bench to score in KC's 2-0 Champions Cup win over Central High and coach Raymond Watson believes the performance proved that KC are not dependent solely on him to get results.

"Normally people have been saying that it is all about 'Whisper', but we have been showing that we can make some noise without whispering. Richards has to get the ball from someone and I must say that the persons that give him the ball, I must give them credit as well," Watson said.

With the core of STATHS being reigning under-16 champions, Williams argues that it is important that they settle quickly and give a good account of themselves.

"It is mostly psychological than anything. It is the first time any of them will be playing in the National Stadium and it will be a big crowd because STATHS travel with a big crowd and KC the same," Williams said. "Hopefully, we can get the butterflies out as quickly as possible and start focusing on us and representing ourselves well out there."

Jamaica College will face Mona High in the first game of the doubleheader at 4 p.m. with the 'Dark Blues' hoping to make it to their third straight final while Mona are looking to continue their deepest ever run in the tournament.