Go with Eagle One in feature 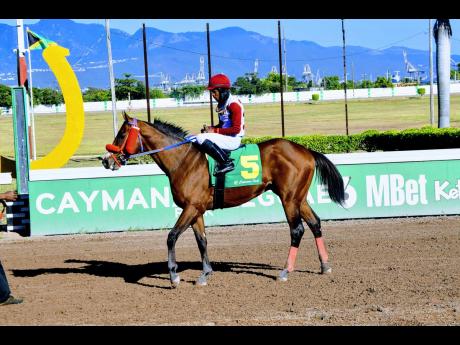 EAGLE ONE with jockey Anthony Thomas after winning the three-year-old and upwards open allowance/graded stakes Eileen Cligott Memorial Trophy over six and a half furlongs at Caymanas Park earlier this year.

Though no stranger to grade-one races, having beaten FATHER PATRICK at six and a half furlongs in February's Eileen Cligott Memorial, EAGLE ONE still finds the top-level runners either too fast in sprints or too classy in mid to long-distance races.

However, his sweet spot is overnight allowance where he won in January this year, clocking 1:19.3 at six furlongs before using race-fitness to clock the same time against FATHER PATRICK a month later at odds of 4-1.

A stalking sort, EAGLE ONE ran way better than his final placing indicated last Saturday, keeping pace in fourth/fifth down the backstretch while stablemate MADELYN'S SUNSHINE led DUKE in splits of 22.4, 34.1 and 46.2 coming off the home turn.

Running against the rail, EAGLE ONE mended rapidly to straighten almost head-on with DUKE with whom he battled behind MAFDELYN'S SUNSHINE before EXCESSIVE FORCE pounced a furlong out. Still running strongly inside the final half-furlong, EAGLE ONE finished fifth in a three-way photo in which late-charging EL PROFESSOR grabbed third from DUKE at the wire.

EAGLE ONE hit the wire in 1:13.1, carrying 119lb, a similar weight to the 118lb, which he will carry with Robert Halledeen replacing Jerome Innis. Trainer Jason DaCosta summoning Halledeen to go three pounds over the allotted 115lb is a clear indicator of where stable confidence lies of the three runners going to post from the leading barn.

With a far milder pace expected, EAGLE ONE will be close to the leaders, who will have no answer to his kick when asked to run by Halledeen.

Fitzroy Glispie's MONEY MONSTER is also down in class but shares topweight 126lb with LABAN, both having won at the level in June. Topweight puts both at a disadvantage against EAGLE ONE, a foreigner and middle-distance specialist.