Girlz to prepare in Australia tourney 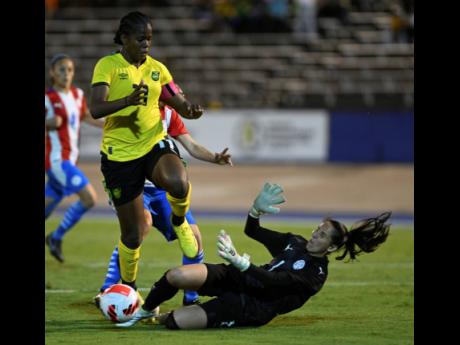 Paraguay goalkeeper Cristina Recalde dives low for a point-blank save on Jamaica’s Khadija Shaw during their women’s friendly international match at the National Stadium on Sunday. Paraguay won 2-1, with Shaw scoring a penalty.

Plans are under way for the Reggae Girlz, unlike the build-up to their historic 2019 campaign in France, to participate in a tournament in the Women's World Cup co-host country of Australia in February, as they prepare for a difficult group.

It will be FIFA's first international women's window next year, which coach Lorne Donaldson outlined as being critical to narrow his roster for the Women's World Cup that will be held in Australia and New Zealand in the summer.

Jamaica Football Federation's (JFF) General Secretary, Dennis Chung, argues that the tournament in February will provide a great opportunity to get the layout of Australia, where they will play all their group matches against France, Brazil and a play-off opponent, who will also be determined in February.

"We are playing a tournament in Australia with some big teams. Australia, Spain and a South American team, and that should give us a lot of experience," Chung told STAR Sports. "It's a good simulation for the World Cup coming up."

The Girlz continued their preparations against Paraguay in a recent two-game series, where they won the first game in Montego Bay 1-0 last Thursday, but lost the return leg in Kingston 2-1 on Sunday. Paraguay are also potential opponents in their Women's World Cup group, being among the teams vying for the spot from a play-off in Group C, which includes Papua New Guinea, Taiwan and Panama.

Chung has not ruled out the possibility of another home-based friendly international series for the Reggae Girlz in February, which Donaldson had indicated previously that they were looking for.

Chung said that the Girlz now have the added advantage with the majority of the pool playing professionally, which puts them in a much better position than their France journey.

"I think that the Girlz, they are playing more in professional leagues, so the current set of Girlz have a lot more to work with. They have a lot more experience. When Hue (Menzies) had them, he was just developing, which made it more remarkable to qualify at that time."

"Going to Australia with all these teams, getting that experience is going to be great for us, because we already have the base in terms of the experience, and it's just really to see the style of play," Chung said.