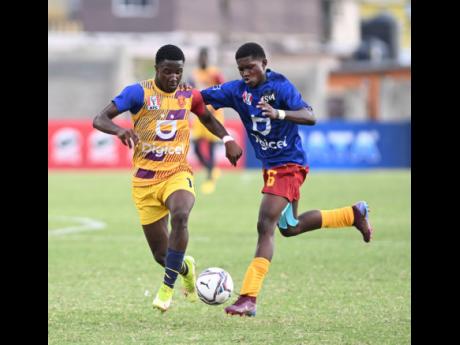 The next edition of the ISSA Champions Cup begins tomorrow and will feature tournament debuts and a 2018 rematch as the battle for rural and urban bragging rights begins.

The opener will be a rematch of their 2018 first-round encounter, where STATHS prevailed 4-2 after extra time. Manchester's latest quest for silverware is after booking their first daCosta Cup semi-finals appearance since 2015. Manchester had a perfect run in the quarterfinals, topping their group, which included Manning's School.

Manchester have scored 45 goals this season, suffering only one defeat, which was in the first round.

In the second match, JC hope to repeat the success in 2014 in the Super Cup era. The 'Dark Blues' have yet to be beaten in their Manning Cup campaign, securing yet another semi-final berth, winning all three of their quarter-final group games. They have scored 70 goals this season.

In the Super Cup era, no team has won back-to-back titles and only two rural schools have won the title since 2014. Clarendon, after yet another strong season, hope to become the first to repeat as champions and start against Mona, who are making the deepest schoolboy football run in their school's history. Mona qualified for the semi-finals of the Manning Cup for the first time.

Mona won 14 matches this season before seeing their unbeaten streak end by KC last Saturday in their final quarter-final game of the Manning Cup.

In the second game, KC, who are seeking their third title, will go against Central High who are enjoying their best season, after qualifying for the daCosta Cup semi-finals for the first time.