D Head Cornerstone to get better of rivals in URTAJ Trophy 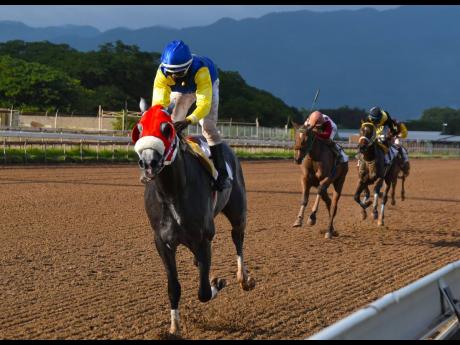 MOJITO is eased at the finish line by jockey Dane Dawkins after winning the two-year-maiden special weight BGLC/TOBA Jamboree Sprint over six furlongs at Caymanas Park on Saturday.

Though he has won his three races at a mile, D HEAD CORNERSTONE has shown enough going two turns to land Saturday's United Racehorse Trainers Association of Jamaica Trophy, finishing fourth in the St Leger and Jamaica Derby.

Forgive D HEAD CORNERSTONE for not claiming the runner-up spot behind PERFECT BREW at nine furlongs and 25 yards in his last route race, denied second by the filly SUNSET SILHOUTTE.

Drawn at post-position one, D HEAD CORNERSTONE's preference for the rail went against him from the clubhouse turn, bottled in by faster rivals, which persisted until the pace quickened on a track favouring speed, leaving him flat-footed and pushed to chase from the three-pole.

Even after straightening third behind PERFECT BREW and getting rid of SUNSET SILHOUTTE, D HEAD CORNERSTONE started searching for the rail when shifted to mid-track for a rally, forcing Reyan Lewis to switch to left-hand whipping as SUNSET SILHOUTTE came off a true path approaching the furlong pole, interrupting the far-striding colt's rhythm.

Last time out at a mile, D HEAD CORNERSTONE proved just how improved he was, slowly into stride before mending along the rail to take over from stablemate GREAT TRICK a half-mile out. I REALISE and SUNSET SILHOUTTE were no match for D HEAD CORNERSTONE, who exploded off the turn and ran away in the straight to clock 1:40.2 for a mile.

Returning at almost the exact handicaps with I REALISE and SUNSET SILHOUTTE, D HEAD CORNERSTONE should have the better of his old rivals.

Spencer Chung's SONNY T AND CHIPPY appeared improved when winning in the visor at nine and 25 last out, however, LION OF EKATI getting within two and a half lengths doesn't say much for the class of the race.

Chung's foreigner, REAL BOSS, could be a dangerous runner if she reports in top shape after being scratched lame on October 22 and had run dismally behind PERFECT BREW in her previous race. The three-year-old American got within a length of PERFECT BREW at seven furlongs on August 6 and has been looking sharp at exercise, clocking 1:08.0 in a five-and-a-half furlong spin on Monday.