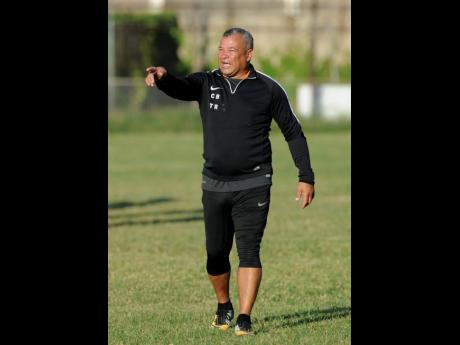 It may not have been the ideal path to the matchup, but Mona's semi-finals clash with JC on November 29 will be one that Butler is anticipating in their pursuit of a maiden schoolboy football title.

Butler said that it would be a clash of team-building ideologies when Mona face his old school in two weeks.

"Well it's a pleasure (to face JC) because some people need to be taught a lesson - the difference between development and recruitment - and I am looking forward to seeing how that works out," Butler said in a jab at JC's system of acquiring players.

Reigning Manning Cup champions KC ended Mona's unbeaten run in the competition with a 4-2 victory in their final quarter-finals match at Stadium East last Saturday, which was inspired by a Dujuan Richards hat-trick.

It was an inconsequential result, with both teams securing semi-finals spots long before that matchup, but what it did was ensured that Mona, who finished second in the quarter-finals group, would face the many-time championships, which Butler believes is fated.

"I'm in a JC old boy and I said there is only one way that I am going to be assured of playing against KC and JC (in the same season) and that is if we lose to KC. So God gave me what could have been a wish. We didn't want to lose but we will play KC and we will face JC," Butler said after the game.

Damoi Whitfield and Zhaine Pinnock had fired Mona back into the contest with early second-half strikes and had their opportunities to take the lead, before Richard's goal in the 87th minute. While it was the end of their perfect record in the competition, Butler said that it may prove to be a blessing in disguise for the rest of the season.

"If we were to lose, now is the best possible time to lose. You don't want to lose a semi-final, a final. So if this game was really inconsequential to the outcome moving forward, I think this was the best game to lose," Butler said. "We did our best and our players will learn because the more they learn from this, is the stronger they are going to be in the semi-finals."