Atomica to set the record straight in Jamaica Cup 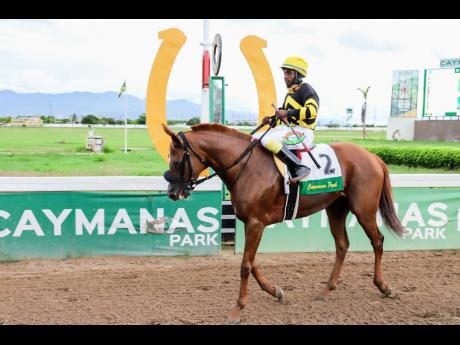 Ignore every yard of ATOMICA'S Gold Cup run. Throw that race out the window and think about the filly who clocked 1:10.4 for six furlongs three weeks earlier, carrying 112lb, three pounds lighter than the 115lb she has been allotted for Saturday's Jamaica Cup against I AM FRED, CALCULUS (should he start) and KING ARTHUR with 126lb each.

Similar to her first loss, a Triple Crown-denying second behind BLUE VINYL in the Jamaica St Leger, ATOMICA's Gold Cup debacle started at the gate - RUNAWAY ALGO bearing down on SHE'S MY DESTINY at the off, startling an already finicky ATOMICA - where her race thereafter went to pieces in a series of events.

After settling down and quickly going past RUNAWAY ALGO to race alongside SHE'S MY DESTINY, quirky ATOMICA's reaction to SHE'S A WONDER coming around from post-position eight resulted in her shying from the speedster, careening into JORDON REIGN's against the rail as they flashed past the five-furlong marker.

Dropping back to fourth against the rail as MAHOGANY came around to claim third, ATOMICA got jammed behind SHE'S A WONDER and SHE'S MY DESTINY. Spotting MAHOGANY making his move on the outside, Dane Dawkins decided to hustle ATOMICA through a space which jockey Charles Hussey has described as a "blind spot" on the turn leaving the three-pole.

With the space tightening as SHE'S A WONDER negotiated the turn just off the rail, ATOMICA ran into her backside and fell back last, passed by even back-marker RACE CAR, who ran wide into the lane. Turning for home last, Dawkins again had to shift ATOMICA from behind SHE'S A WONDER after which she ran on in the stretch run to finish fifth, beating SHE'S MY DESTINY, two and a quarter lengths behind third-place I AM FRED, who was six and a half off the winner, MAHOGANY.

ATOMICA, who had dismissed SHE'S MY DESTINY with utter disdain in an incident-free race three weeks earlier, hardly asked a question by Dawkins, still beat her by a length and a quarter in the Gold Cup after straightening six and a half lengths behind at seven furlongs.

Had ATOMICA not got into problems in the Gold Cup, MAHOGANY could not have touched her with a long pole. Returning at nine and a half furlongs for the Jamaica Cup, carrying 115lb, getting 11lb from I AM FRED, and KING ARTHUR, Subratie's derby-winning filly should set the record straight with a gate-to-wire win.

Her stablemate, CALCULUS, is the two-turn specialist in the line-up but has not trained for this event and reportedly struggled after his last workout. Though KING ARTHUR flew at exercise Saturday morning, clocking 1:26.4 for seven furlongs, he might have left his form on the racetrack, having not raced since August 27.

St Leger winner BLUE VINYL looked his old self at exercise but has the daunting task of coming around from post-position 10 to get ahead of ATOMICA drawn at stall eight, a tall order especially after the whipping the filly dished him in the derby.