Nomoredeals will be hard to beat 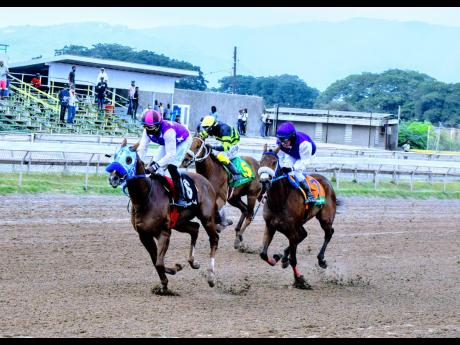 NOMOREDEALS (left), ridden by Dane Dawkins, wins ahead of SUNSET SILHOUETTE with Abigail Able over 6 and a half at Caymanas Park on Sunday, January 30.

NOMOREDEALS could either make or break pockets when he returns off a four-month lay-up with an equipment change, visor off and blinkers fitted, for Sunday's closing event at five furlongs round after flopping as a 4-5 favourite when last out in July.

A maiden winner in January, allowing SUNSET SILHOUTTE 13lb at six and a half furlongs, NOMOREDEALS went home earning in his next six starts, placing second twice, before racing prominently and finishing down the track in June's 2000 Guineas.

Proving his Guineas run was an overwhelming ask against BLUE VINYL, runner-up BRINKS and EMPEROR OF THE CATS, NOMOREDEALS returned 20 days later to run a cracker at five furlongs straight, just failing to catch course-specialist AWESOME RICH, who won in 58.3 on a sloppy track.

Trainer Gresford Smith, however, made an odd decision to refit NOMOREDEALS with the visor, which he had ditched for the race out of the straight. The result was NOMOREDEALS' worst run in 13 starts, finishing 16 lengths behind BUZZ CITY LIGHT on the freshly resanded track.

Despite Smith ditching the visor in favour of blinkers in which he had got off the mark, NOMOREDEALS' poor run must have been issues beyond headgear because it has taken him four months to get back to the races.

Nevertheless, NOMOREDEALS appears back to himself since eased into serious training a month ago, completing his preparations with a speed gallop at five and a half furlongs, clocking 1:09.4. A week earlier, he beat last Saturday's upset winner, MONSIEUR BLUE in a half-mile spin, signalling his readiness to take on non-winners of two races, company he would have the measure of months ago had he not gone on a lay-up.

The event is stacked with quicksters such as JUNGLE BOOGIE, BROMPTON ALEX, SHE'S FANTASTIC, FEARLESS FIRE, RAMBLING ROSE and JAGUAR, however, they are all either suspect to a strong early pace, or short runners, who stayer MONSIEUR BLUE caught at five furlongs straight.

NOMOREDEALS' early season form, beaten a half-length by imported LUKSOL at six furlongs, having BLUE VINYL two lengths behind in third, points to his class, which will make him a tough horse to beat if he reports anywhere close to his best.