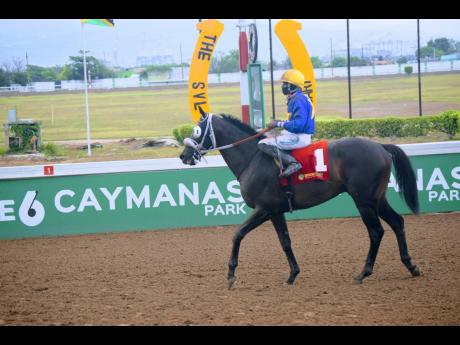 Since returning from a four-month lameness lay-up late April, BIG BIG DADDY has kept nothing but stellar company in 12 overnight-allowance starts, finishing outside the purse only once against horses who have since gone on to beat open-allowance company.

Rounding into top shape as the grade gets weaker, BIG BIG DADDY's last two runs - third grade one CALCULUS and I AM FRED in the 10-furlong Menudo Trophy and a fighting second to ONEOFAKIND in the Errol 'Big Sub' Memorial at a mile - makes him hard to beat against lesser rivals in Sunday's Caymanas Park Announcers' Trophy.

Though venturing over a shorter trip with top weight 126lb, BIG BIG DADDY's pace should keep him in touch with BERN NOTICE, SIR JOHN and BATON ROUGE, who will try running him off his legs but at the expense of stamina with a quality stalker snapping at their heels.

Carrying 121lb last time out, BIG BIG DADDY kept ONEOFAKIND honest from the three pole to a furlong out before the grade-one miler pulled clear to stamp his authority on the Errol 'Big Sub' Memorial, clocking 1:39.3.

In his previous race, the 10-furlong Menudo Trophy, BIG BIG DADDY finished a respectable third in a six-horse field in which CALCULUS overpowered I AM FRED, who was hot off a win over MAHOGANY at six furlongs.

Pace shouldn't be a problem for BIG BIG DADDY. When beaten by ARTESIA at seven furlongs late August, BIG BIG DADDY was used up early down the backstretch to escape the one hole, which handed him the lead coming off the home turn.

However, contesting splits of 34.1, 46.2 and 58.3 left BIG BIG DADDY exhausted when ARTESIA swooped down wide under a restrained ride from Omar Walker. Despite disputing and leading the race, BIG BIG DADDY still had enough in the tank to stay on for second.

Drawn better in stall four BIG BIG DADDY might have some traffic to negotiate in the 15-horse field but, having proven he's no slouch, should be able to weave his way past rivals under Dawkins, who should have a good day as he seeks to cement his lead atop the rider' standings over champion Anthony Thomas.