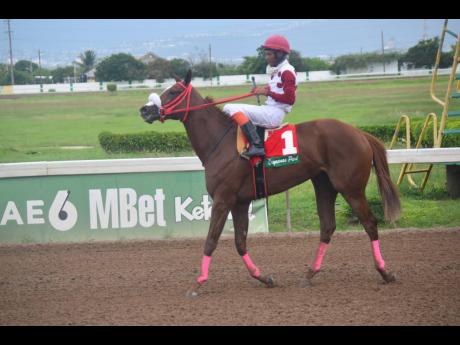 THALITA's late rail rally to beat speedy LEGIT BOSS in the Princess Popstar at five and a half furlongs proved the Soul Warrior-Luminous Trieste filly's ability to track a torrid pace and quicken when asked, a quality which could serve her even better at six furlongs on Saturday in the first major two-year-old race of the season, the Cash Pot 'Only One for Me' Trophy.

Both fillies have been looking sharp at exercise since their duel, LEGIT BOSS returning with tongue tie fitted by champion trainer Anthony Nunes for the $3.25 million event, stakes money he badly needs to make up ground on THALITA's Jason DaCosta in their battle atop the standings.

A change of equipment, especially on a filly as well-bred as LEGIT BOSS could make the difference in a two-year-old race. LEGIT BOSS' dam is Bilingual, who placed second in the 2000-metre Jamaica Oaks behind Marlene My Love and was runner-up to eventual Triple Crown winner She's A Maneater in both the 1400-metre Thornbird Stakes and 1000 Guineas at a mile.

Cases must also be made for THALITA's stablemate, MAMMA MIA, and the lone colt in the line-up, Richard Azan's MOJITO, who was noted closing on her at five furlongs round after being slowly into stride when both debuted on October 16.

MAMMA MIA is also well-bred, a half-sister to 2018 Oaks winner FAYROUZ, who showed her qualities in a sprint. MOJITO will be better for the experience behind MAMMA MIA and has shown at exercise that a better break will make him dangerous against the fillies, who could burn themselves out at six furlongs.

LEGIT BOSS had beaten THALITA at three furlongs when both fillies debuted August 1. THALITA reported for the Princess Popstar rematch on the round course with a fast-time win at five furlongs round under her girth, clocking an impressive 1:00.2 to get off the mark.

Reporting razor-sharp after galloping a half-mile in 47.1 upside imported stablemate LURE OF LUCY at exercise, THALITA got the jump on LEGIT BOSS at the start but the speedster took over under Dick Cardenas and led in splits of 23.0, 34.2 and 45.4.

A furlong out, it appeared as though LEGIT BOSS had kicked on when taken off the rail by Cardenas, leaving THALITA behind in second and imported SISTREN TREASURE looming large in mid-track. However, angled to the rail by Anthony Thomas, THALITA found a third gear and dug in nicely inside the final half-furlong to not only collar LEGIT BOSS but to win going away by a length.

All unproven past five and a half furlongs, it wouldn't be wise to go head over heels for any of the top four in the Cash Pot Trophy.