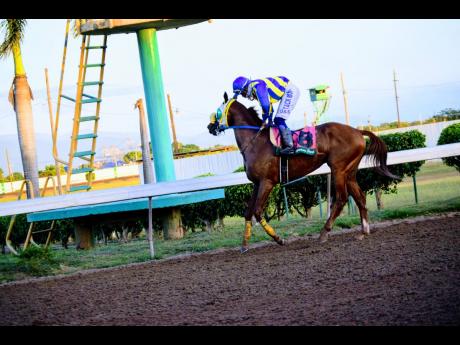 ONEOFAKIND appears to be Anthony Nunes' shot at the $18.75 million Mouttet Mile, which could be the last straw he has to grasp at to deny Jason DaCosta dethroning him as champion trainer.

The crack miler returns in Sunday's Errol 'Big Sub' Memorial at his favourite trip, rounding into form after an encouraging second-place run behind imported RUNAWAY ALGO at seven and a half furlongs.

Reporting off a six-month lay-up three weeks ago, ONEOFAKIND benefitted from a class relief to face overnight-allowance runners. However, he ran smack into an unbeatable RUNAWAY ALGO, who had no matching speed and was able to dominate the pace, clocking an eye-popping 1:30.4, albeit on a sloppy but fast track.

Though RUNAWAY ALGO was eased close home, ONEOFAKIND's late acceleration showed that he is in tip-top shape, finishing in 1:31.1, a time which should have him shredding his rivals on Sunday.

ONEOFAKIND belongs nowhere close to overnight company, similar to RUNAWAY ALGO, who stepped up back to open allowance two weeks later and was only beaten by CALCULUS at nine furlongs and 25 yards in the Mark My Word Trophy.

ONEOFAKIND had three epic battles against CALCULUS in the first three months of this year, finally getting the better of last season's Jamaica Derby winner, by a neck, at seven and a half furlongs, before getting a well-deserved rest.

Nunes starts the Heroes holiday weekend $6 million in stakes arrears after DaCosta went on a blitz last week Saturday with a four-timer. Nunes had whittled the lead to $3 million before DaCosta, who he narrowly beat on the last day of the 2021 season, kicked on with his four winners.

With the Mouttet shaping up to be a cracker - led possibly by RUNAWAY ALGO, Ian Parsard's trio of MAHOGANY, JORDON REIN'S and SHE'S A WONDER, plus DaCosta speedsters MAKEUPARTIST and SHE'S MY DESTINY - off-the-pace runners such as CALCULUS and ONEOFAKIND are not to be written off out the mile chute.

Nunes used one race to wrest back his title from DaCosta's grasp last season, GOLDEN WATTLE's stunning Jamaica Two-Year-Old Stakes upset win over colts and geldings. ONEOFAKIND, who clocked 1:38.0 at a mile last December, could be his silver bullet among a field of speedsters a year later.