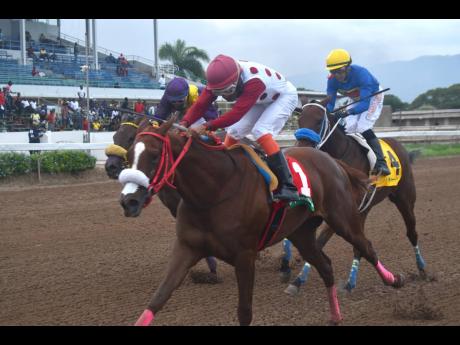 THALITA, ridden by Anthony Thomas, wins the Princess Popstar Trophy race for two years old restricted allowance stakes over five and a half furlongs at Caymanas Park on Saturday.

Raw form points to ALEXA'S SECRET landing Saturday's Titania Trophy, a non-winners of two races event for fillies at five and a half furlongs after emerging second from a big marker race won by SILENT MISSION last month.

Reporting for the September 20 race with Omar Walker replacing Anthony Thomas, who over-confidently finished fourth aboard the Jason DaCosta classic-placed filly in her previous race, SILENT MISSION responded to the six-time champion to out-finish ALEXA'S SECRET and A GIFT FROM BEN from along the rail.

After chasing BERLINO'S CHOICE and A GIFT FROM BEN into the lane, ALEXA'S SECRET hit top stride to close as a team with SILENT MISSION, who was always seeking racing room from the top of the straight before angled to the rail by Walker, allowing her to explode past rivals close home.

ALEXA'S SECRET lost no marks in defeat, beaten by a head, which SILENT MISSION promptly proved five days later by shocking non-winners-of- four at odds of 19-1, closing from off the pace to beat late-running stablemate TEKAPUNT after hectic fractions set by the speedsters.

Looking happy at exercise, ALEXA'S SECRET returns at 119lb with Reyan Lewis replacing Christopher Mamdeen. Working reasonably well, ALEXA'S SECRET has no excuse not to prove the form right following SILENT MISSION's victory up in class and A GIFT FROM BEN's easy win over THIRTYONEKISSES.

WOWTASTIC had finished ahead of ALEXA'S SECRET on September 3 when caught at the wire by LA CRIMAE. However, ALEXA'S SECRET was returning off a three-month lay-up and had convincingly turned the tables on fifth-place WOWTASTIC when beaten by SILENT MISSION.