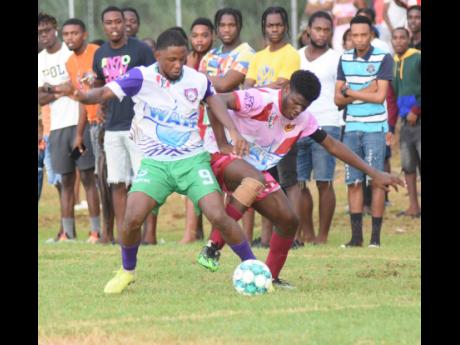 The other goalscorers were Tajay Cooper with a hat-trick, Theonjae Bennett with a brace and Keven Clarke.

Lewis said getting into a rhythm and scoring freely again is a great feeling but stressed that he wants to continue building towards scoring at the business end of the competition.

"It's a great feeling getting the goals. The plan is to do much better than I did last year and lead the team to a successful season.

"We just need to get together as a team because last year we got a bit comfortable in the second round. I aim to be that player who is going to keep the team together and drive the team forward by scoring goals when we get to the difficult rounds of the competition," Lewis said.

He noted that he has his sights set on breaking records this season after scoring 11 goals in the last campaign.

"Honestly, I tell myself that I want to score like 40 goals which I believe would be the record. I know it's not going to be easy but I'm working on it," he said.

William Knibb coach, Dwight Jeremiah, said he is pleased to see Lewis hitting the net but noted that scoring in the deeper rounds should be the target.

"He did not have the perfect preseason so I guess that's why he started slow. Again, Muschett and this one, even more, he did the things we think are his strengths, however, Mark understands that it is when he gets to the business end of the season that he will have to produce. There is no harm in scoring and getting into the habit of doing it now," said Jeremiah, who added that while the buzz is good for fans and pulling out that 12th man, they are not getting carried away.

"We don't want to get into a happy-go-lucky mode because of a result like that. We set our objectives and know that after three games, we have achieved nothing. It is a good thing for them on the day but as for the buzz from the fans, it is good because we need the support off the field."