Nelson shines with a double in Canada 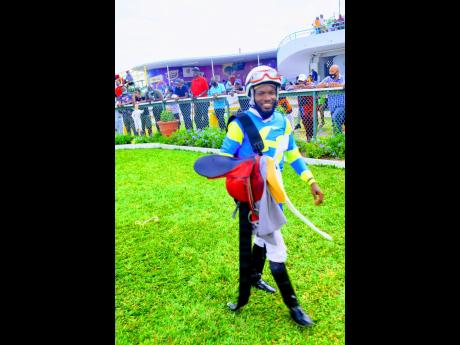 Jamaican Dane Nelson closed the gap on leader Enrique Gonzalez when he produced a double on Friday's nine-race card at Century Mile.

The 37-year-old paired with 6-1 choice FIRST PRINCE to capture race five over 6-1/2 furlongs before combining with favourite LILLY'S OF LONDON to win race eight over six furlongs.

Nelson's success took him to 46 wins for the season, 10 behind Gonzalez, with reigning champion Barbadian Rico Walcott lying third on 41 wins.

Barbadian N'Rico Prescod reached the winners' circle in race three over seven furlongs, piloting 7-1 bet ADDDIDIT to a narrow victory by a nose over the three-year-old and upward fillies and mares.

Fellow countryman Rashaun Griffith followed up in race six with 5-1 choice PULL THE PIN, steering the five-year-old gelding to a one-length win over the three-year-olds and upward going 6-1/2 furlongs.

Nelson took the headlines, however. He opened his account with FIRST PRINCE, carrying the four-year-old gelding to victory by a nose over the three-year-olds and upward.

FIRST PRINCE chased down BAR NO Q, grabbed the lead on the far turn before holding off a strong challenge from favourite BARE BACK JACK in the stretch.

Nelson's second win was another narrow score over the two-year-old Alberta-bred maidens. He stalked the pace from fourth as 3-1 bet SINGING BELL produced the early fractions, before bidding with LILLY'S OF LONDON and edging out the leader at the wire.