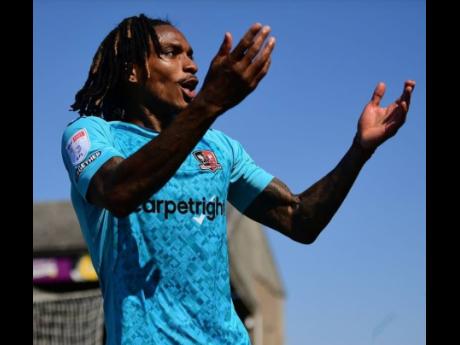 Hat-trick hero Jevani Brown, the former Jamaica youth international, said he was "buzzing" after his treble helped Exeter City romp to a convincing 4-0 win at west country rivals Forest Green Rovers in an English League One match before the Sky TV cameras on Saturday.

Forest Green, who pipped Exeter to the League Two title last season, were outplayed by the visitors, who cashed in on a defensive blunder on six minutes as Brown slipped Sam Nombe through to drill home the opener.

Brown, 27, who appeared on the brink of making his senior Reggae Boyz debut before withdrawing from a tournament in Austria in August, then doubled the lead from the penalty spot midway through the first half, before making it three just before half-time, slotting home from a Jay Stansfield cutback.

The fourth came on 83 minutes, again from a penalty. Brown put both spot kicks into the bottom right corner past the dive of goalkeeper Luke McGee to take his tally to six for the season.

"Personally, I am buzzing," he said afterwards. "Luckily I am on pens so got two chances. But from the start it was a brilliant all-round team performance.

"I am delighted with the hat-trick, but the most important thing after the back-to-back defeats (against Shrewsbury Town and Burton Albion) was to get the three points.

"I have no one but teammates to thank for getting the goals. It has been a good start and I feel like there is some positivity. It is important as after the little blip, getting the result was the main thing and great to get the three."

It was the third time in his senior career that Brown has taken home the match ball, having scored two hat-tricks for his former club Colchester United, but it was his first for Matt Taylor's men, and were his first goals for the club since mid-August.