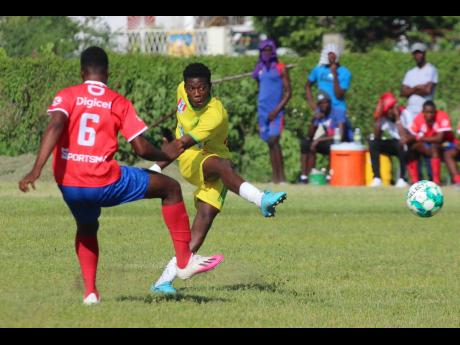 All eyes will be fixed on the derby clash between Morant Bay High and Paul Bogle High today starting at 3:30 p.m. as football pundits try to decipher if the latter is the true protagonist in this year's ISSA/Digicel daCosta Cup.

With a perfect three-in-three record and nine points to boast, Paul Bogle are favourites to land another three points, as they face Morant Bay, who are currently fourth in Zone L with four points following one win, a draw and a loss.

The Morant Bay backline will have their work cut out as they try to stop the marauding attacker Malleak McFarlane who is coming off a recent brace against Seaforth in a 3-1 win.

To add to that Paul Bogle has rattled in nine goals thus far in the competition, with their miserly backline yet to concede a goal, while Morant Bay have scored six goals and have let in one fewer to date.

Another interesting fixture that is sure to garner support is the clash between second-place Yallahs High and St Thomas Technical High School.

Yallahs, on six points, are three points ahead of St Thomas Tech and they will be buoyed by back-to-back wins, which have seen them fire in eight goals in the competition, while conceding only two goals in their opening loss to Seaforth High.

St Thomas Tech, on the other hand, may feel they have found their shooting boots, following their comprehensive 4-0 beating of Robert Lightbourne High.

The other Zone L fixture will see bottom-place Robert Lightbourne going up against third-place Seaforth. Robert Lightbourne are among three schools to have lost all three matches so far, while conceding 12 goals and are yet to register a goal in the competition.

Ewarton from Zone K and Grange Hill from Zone D are the other schools that are yet to get off the mark.

In the day's other encounter, fourth-place BB Coke travel to last-place Sydney Pagon in Zone E. Former Ben Francis Cup champions BB Coke have only a single point from two games, but the most worrying trend is that they are yet to score a goal.