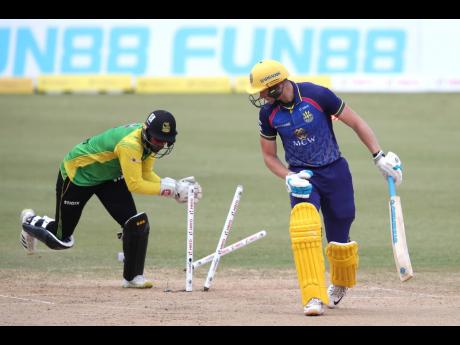 Corbin Bosch (right) of Barbados Royals is stumped by Amir Jangoo off the bowling of Imad Wasim of Jamaica Tallawahs during their Caribbean Premier League (CPL) match at Queen’s Park Oval in Port of Spain, Trinidad and Tobago, yesterday.

Jamaica Tallawahs, after being outplayed in their first meeting, got the better of Barbados Royals by six runs under the Duckworth-Lewis-Stern method in their return Caribbean Premier League fixture in Trinidad and Tobago yesterday.

Tallawahs restricted Royals to 146 for six and almost let slip what should have been an easy victory, as they managed to reach 126 for five in 17 overs, which was six runs over the par score when rain ended the contest.

Royals would have won by the D/L/S method, had the rain ended the contest a mere three balls earlier, however, a timely six by captain Rovman Powell ensured they were ahead of the run rate.

The ball initially dominated the bat with Tallawahs opting to field, which proved correct on a track that was offering much assistance to the bowlers.

Player-of-the-match Imad Wasim continue to relish the Caribbean conditions, claiming three for 14 as Royals struggled to 17 for three in the power play.

When Fabian Allen sent back Azam Khan for 12, at 47 for four in the 10th over, a paltry score looked imminent for Royals, however, wicketkeeper Quinton De Kock and captain David Miller resuscitated the innings with an 83-run fifth-wicket partnership.

Miller, who was dropped early in his innings by wicketkeeper Amir Jangoo off Migael Pretorius, scored 34 from 27 balls with one four and two sixes. De Kock chalked up another half-century in the tournament when he top-scored with 73 from 43 balls with seven fours and three sixes.

In the reply, the new opening pair of Jangoo and Brandon King gave the Tallawahs the much-needed start they were clamouring for, adding 53 runs in just 4.3 overs. Jangoo was the first to go as he miscued Obed McCoy's slower delivery and was caught for a quick-fire 29 from18 balls after hitting five fours and a six.

King and the returning Shamarh Brooks looked comfortable and were cruising towards the target at 95 for one in the 10th over when the rain came and halted proceedings.

On the resumption, a rejuvenated Royals bowlers got into their act and swiftly removed four Tallawahs batsmen for just 17 runs.

Precariously placed at 116 for five, captain Powell and Imad Wasim smartly clawed their way to 126 while keeping the run rate in check, until the rains came for a second time which ultimately ended the contest.

Wasim thinks Tallawahs was put through a slightly worrying period, but he had no doubt his captain would come up big in the end.

"I know that Rovman would finish the job well. I know him since 2015 and he is one of the best players in the world so far. He is the best finisher in the world and I am excited to be a part of the Jamaica Tallawahs," Wasim said.

Tallawahs maintain their second position in the standings on eight points, four behind leaders Royals, who were losing their first match of the campaign.