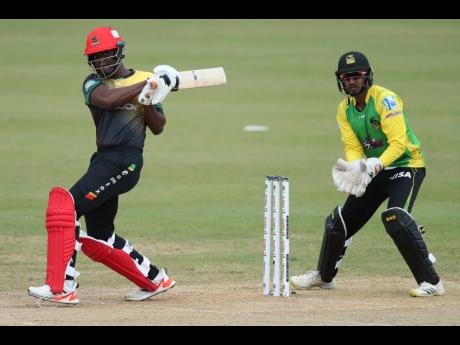 The Jamaica Tallawahs batting was put under the microscope again after their eight-wicket loss to St Kitts and Nevis Patriots in their rain-affected Caribbean Premier League (CPL) cricket match at the Queen's Park Oval in Port-of-Spain yesterday.

Before the match, captain Rovman Powell lamented the poor top-order display by Tallawahs, however, they got a decent start in this encounter, putting on 49 runs in the power play.

They, however, could not capitalise on the start and only managed to get to 139 for five, after which the Patriots set a revised target of 113 in 15 overs, due to a rain interruption, got home for the loss of just two wickets under the Duckworth-Lewis-Stern method.

Tallawahs remain in second position in the standings on net run rate as Patriots joined them on six points, but with a negative 1.104 net run rate.

Asked to take first strike, Tallawahs persisted with openers Kennar Lewis and Brandon King and the pair justified their continued selection with a positive start in the power play.

Lewis was the first wicket to fall, as he was trapped in front by spinner Rashid Kahn for 24 runs, 20 of which were in boundaries after facing 17 balls.

Brandon King also helped himself to 22 off 23 balls with three fours, but he fell in the eighth over to Akila Dananjaya at 58 for two.

Skipper Rovman Powell had a rare failure, as he went via the run-out route for six, but left-hander Raymon Reifer celebrated his call-up to the West Indies World Cup squad with a fighting 40 not out, to rescue Tallawahs' innings.

The Barbadian all-rounder stroked four fours and two sixes in his 26-ball knock to help get Tallawahs to a fighting total of 139.

Jamaican Fabian Allen uncharacteristically got to 23 from 24 balls with three boundaries, but the day belonged to the disciplined Patriots bowling, which restricted Tallawahs below the par score at the Oval.

There was a rain interruption at the halfway stage and the target was revised to 113 in 15 overs. The Patriots made the most of the revised conditions, as most of their top-order batsmen chipped in with handy contributions. Openers Andre Fletcher (45 not out) and Evin Lewis (20), contributed 49 runs for the opening wicket which laid the foundation for the run chase.

Darren Bravo then contributed an unbeaten 39 from 21 balls with three fours and three sixes to seal the deal for the Patriots with two overs to spare.

In the day's other match, Trinbago Knight Riders defeated Amazon Warriors by 26 runs. Knight Riders made 150 for eight from their 20 overs and then bowled out Warriors for 124 in 17.5 overs.