Old Harbour High off the mark in daCosta Cup 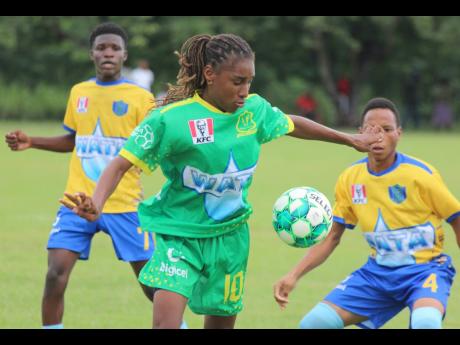 Old Harbour High coach Dwight Whyte made it clear that he expects his team to get better following a workmanlike 3-1 win over Tacius Golding High in Group M action of the ISSA daCosta Cup at the Port Esquivel Sports Complex yesterday.

It took a double strike from Rudolph Smith and a lone strike from playmaker Shyjah Orridge to hand Old Harbour all three points after a pesky Tacius Golding unit had kept the tie interesting at 1-1 with 13 minutes to go in the contest.

For Whyte, the early season jitters got the better of his team, which is expected to get better with a few more players being eligible for this weekend's set of matches.

"We were good in certain areas but it is a work in progress. We had a lot of jitters and we were lacking in confidence since we lost one of our main playmakers. We still have seven players who should be cleared by ISSA by Friday, and they will make a difference come the next match."

"Apart from the defensive indiscipline, a little tiredness also kicked in towards the end of the match, and that allowed us to give up two easy goals, so we will have to work on our fitness moving forward."

The Group M contest pitted the two Old Harbour-based institutions at the virtually new football venue at Port Esquivel, which proved difficult to manoeuvre for the players due to the cricket pitch in the centre of the field.

It took all of 56 minutes for the ever-probing Old Harbour offence to break down the Tacius Golding back line, when Rudolph Smith rose high to head home from close range, following a Deshawny Morgan left-sided cross.

After dominating most of the proceedings, the Old Harbour fans were then silenced in the 77th minute, when Javier Jones lobbed goalkeeper Kristoff Johnson to equalise for Tacius Golding.

The ever-present Smith ensured that the 1-1 score only lasted three minutes, as it was his persistence inside the box that saw his second bite of the cherry bearing fruit, following his initial blocked shot from inside the area.

It is only fitting that the victory was capped off in time added on by Old Harbour's inspirational dreadlocked playmaker Orridge, who made it 3-1 with a calm finish from close range.