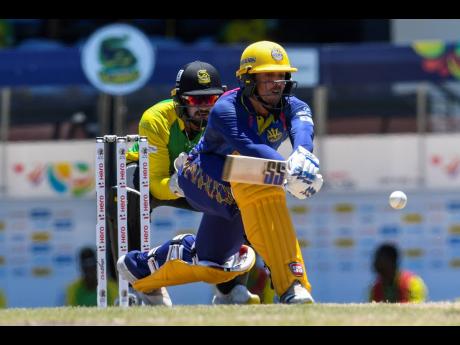 THE JAMAICA Tallawahs are showing hot and cold signs as they suffered their second defeat in this year's Caribbean Premier League after a loss to Barbados Royals yesterday.

Tallawahs lost to the St Lucia Kings on Wednesday but rallied to defeat the Trinbago Knight Riders on Saturday. Yesterday's loss to Royals keeps Tallawahs in second position in the standings with six points, with the unbeaten Royals extending their lead at the top with 10 points from five games.

After being asked to take the first strike, Tallawahs managed to claw their way to 156 for eight but failed to prevent a top-order onslaught from Royals who, in the end, eased to 157 for two with a ball to spare.

For Tallawahs' captain Rovman Powell, the team's top-order struggles continue to hamper them.

Once again, Tallawahs were pegged back by an early loss of wickets in the power play, with openers Brandon King (o) and Kennar Lewis (1) returning to the pavilion with just seven runs on the board.

It took another recovery mission from captain Powell to rescue the team, as he and wicketkeeper Amir Jangoo added 57 runs for the third wicket.

After Jangoo fell for 30 from 36 balls, Powell and Raymon Reifer then put on 34 runs for the fourth wicket, before Powell fell to Player-of-the-Match Obed McCoy for a well played 52 from 31 balls with five fours and three sixes.

Reifer and Fabian Allen took Tallawahs' score to some respectability by adding 43 runs for the fifth wicket at 141 in the 17th over before Allen handed McCoy his second wicket for 20.

Reifer would be the last wicket to fall in the final over to Jason Holder for 41, as McCoy ended with three wickets for 24 runs while Holder bagged two for 24.

For Powell, he believes it's just a matter of time before the batters get ticking once again.

"The funny thing is I think the guys are in good knick. In training they are stroking the ball good. It's just that they are not batting enough balls on the wicket. Once they bat enough balls, we can get to 50 or 60 without loss or even one wicket down," he said.

Contrastingly, Royals have no such problems with their top order, despite Chris Green sending back the in-form Kyle Mayers early for just 12 runs.

The South African pair of Quinton De Kock and Corbin Bosch took the contest away from Tallawahs following a 117-run second-wicket stand.

De Kock was in a no-nonsense mood with a quick-fire unbeaten 64 from 53 balls with seven fours, while Bosch was equally impressive with a knock of 56 from 49 balls before he was bowled by Mohammed Amir.

Captain David Miller with 17 not out then helped to see his team over the line, which he was pleased with.

"We obviously started well, and I spoke about momentum in these sorts of competitions. I look at it as team performance as the bowling attack has been good and the batters have followed," Miller said.