We will take this loss on the chin – Powell 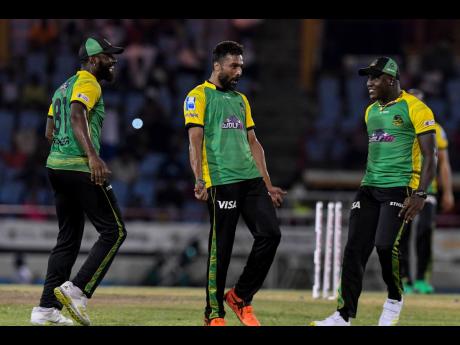 Jamaica Tallawahs captain Rovman Powell said his team will take their two-wicket loss against the St Lucia Kings on the chin and move on following their nail-biting Caribbean Premier League cricket encounter at the Darren Sammy Stadium in Gros Islet.

After conjuring up a fighting 163 for eight, Tallawahs failed to prevent Kings from overhauling the total, as they reached 164 for eight with one delivery to spare.

Tallawahs slipped from the top of the standing to second place on four points after the loss, while Kings leapt from the foot of the table to fourth with their first two points in the six-team tournament.

"We were good and right there, but the ball was wet and it became difficult. I tried to slip in a few overs from my spinners, but it was also difficult and we will take it on the chin and go back to the drawing board," said Powell.

Asked to take the first strike, the Tallawahs got off to a decent start thanks to openers Kennar Lewis and Brandon King who posted 38 runs in 3.6 overs. Lewis fell first to Scott Kuggeleijn for 19, before Jamaican spinner Jeavor Royal sent back Shamarh Brooks for a golden duck at 39 for two in the fifth over.

Alzzari Joseph then had skipper Powell caught in the deep for seven, before Royal ran out King for 19, at 62 for four in the ninth over.

Raymon Reifer and Imad Wasim then struck up a useful partnership, with the pair adding 59 runs for the fifth wicket to give the Tallawahs innings some impetus.

Reifer would go on to top score with 62 from 41 balls with four fours and four sixes, while Wasim chipped in with 20.

Needing just over eight runs per over, the Kings were stunned early by two quick wickets from left-arm seamer Mohammed Amir who removed opener Niroshan Dickwella for 10 and captain Faf Du Plessis for a duck at 17 for two.

Spinners Chris Green and Wasim also came up big with wickets to stifle the King's middle order at 75 for five in the 11th over.

Player-of-the-Match Johnson Charles brought things back the way of the Kings with a fighting 62 from 39 balls with four fours and four sixes.

When he fell, Kings needed 50 runs off five overs. They would then get lower-order contributions from Roshon Primus 22 and David Weise 20 not out, which carried the hosts to victory.

Amir finished with three wickets for 25 runs while there were two wickets each for Wasim and Reifer.

Meanwhile, in the first match of the doubleheader, the Barbados Royals moved to the top of the standings with three wins in as many games, following an 80-run win under the D/L method over the Trinbago Knight Riders.

The Royals batted first and made 194 for four, with 60 from captain David Miller, 52 from Kyle Mayers and 44 from Quinton De Kock.

Jamaican pacer Oshane Thomas was among three players to take two wickets, as the Knight Riders were in tatters at 51 for seven in the eighth over when rain ended the contest.