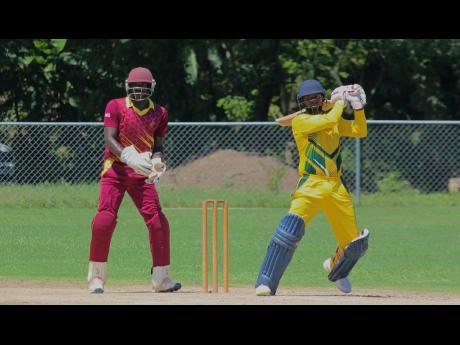 Clarendon Cricket Association’s batsman Albert Gopie (right) scores through the off side on his way to an unbeaten 40 against St Catherine Cricket Association in their JCA T20 Bashment encounter at Sir P Oval in Clarendon on Sunday. Wicketkeeper Ronville Brown watches. Clarendon won the match.

The nation's cricketers were back in action for their respective clubs and parishes in the Jamaica Cricket Association T20 Bashment competition over the weekend, following the successful staging of the SDC National Community T20 competition, recently.

Only Darren Small with 22 and Gifton Wray and Amoi Campbell with 19 a piece made runs of significance for St Ann.

In reply, St Mary eased to their target by scoring 134 for one in 17 overs, with Antony Walters leading the way with an unbeaten 53 and Tyrone Daley getting 51 not out.

The pair put on a 108-run unbroken second-wicket partnership to steer St Mary home after opener Williams fell lbw to Orando Royes for 19.

St Catherine, after being sent in on a difficult pitch, were blown away for just 85 runs in 18.4 overs with Jermaine Thomas bagging three wickets for 12 runs and Errol Thomas and Albert Gopie getting two wickets each.

Former national youth player Gopie then returned to hit an unbeaten 40 from 28 balls to guide Clarendon to 87 for four in 16 overs. Rajay Christie chipped in with 15 not out against three wickets from Shane Cole.

The Tigers first posted 200 for three in their allotted 20 overs, as the right-handed Lionel Morant made an unbeaten 102 from 56 balls while hitting six fours and eight sixes. Javaughn Buchanan chipped in with a polished 61 from 47 balls, as he and Morant added 135 runs for the third wicket.

In reply, Melbourne got over the line with one ball to spare, posting 201 for seven, with Jon-Ross Campbell getting 54 and Shalom Parnell scoring an unbeaten 58. National off-spinner Akim Fraser took three wickets for 48 runs with James McDonald grabbing two wickets for 46 runs.