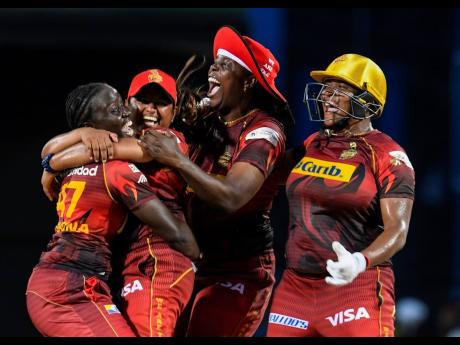 The contest pitted captains Deandra Dottin against Hayley Matthews and the former would come out tops, as both were big with the bat.

It was, however, the off-spin of Anisa Mohammed that proved to be the catalyst for the Knight Riders, who dismissed the Royals for 90 in 18.4 overs chasing 101 to win.

The Knight Riders who were asked to take the first strike, opened the innings with Dottin who was her customary aggressive self, scoring 59 from 62 balls with four fours and two sixes.

The right-hander watched as wickets fell around her with regularity, as only South African Sune Luus got to double figures by scoring 12 from 16 balls.

Jamaican wicketkeeper Natasha McLean failed to spark with the bat by scoring only four runs, but her stint behind the stumps later in the game was exceptional when the Royals chased, as she took two catches and executed a stumping.

Matthews came up big with the ball in the Knight Riders' innings, bagging three wickets for 22 runs in her four overs, while the other Jamaican in the Royals line-up, Chinelle Henry, went wicketless in her two overs while conceding 11 runs.

With the brunt of the runs scoring lying heavily on the shoulders of Matthews, the right-hander also opened the innings for her team and was looking good despite a flurry of wickets falling.

The Royals were in a spot of bother at 74 for eight in the 17th over, still needing 27 runs to win.

Matthews reached 46 from 49 balls with three fours and was looking intent on taking her team to victory. Anisa Mohammed, however, would return to bowl the 19th over and her golden arm sent back Matthews to leave the Royals on 89 for nine.

Mohammed finished with three wickets for 16 runs while there were two wickets each for Sheneta Grimmond, Hayley, Jensen and Luus.