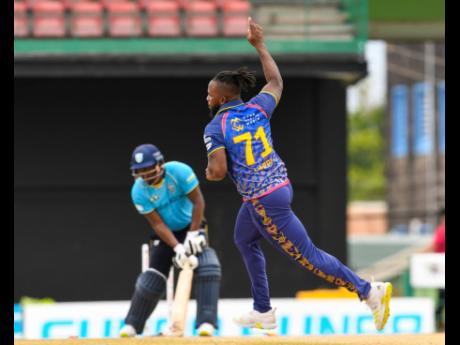 Kyle Mayers produced a devastating spell of swing bowling, which claimed four wickets in a deadly two-over spell, which helped to propel the Barbados Royals to an 11-run win under Duckworth- Lewis-Stern method over the St Lucia Kings, in their rain-affected Caribbean Premier League (CPL) encounter yesterday in Basseterre, St Kitts.

Man-of-the-Match Mayers first contributed a vital 36 runs from 23 balls to help the Royals post 162 for seven, before returning to bag the four wickets, as the Kings reached 91 for four in nine overs following the reduction.

Asked to take first strike, the Royals got a decent start with the bat from Mayers and Rahkeem Cornwall, with the pair adding 49 runs for the first wicket in 4.5 overs before Cornwall fell to Alzarri Joseph for 32.

De Kock would go on to hit one four and a six in getting to 24, while captain David Miller chipped in with 24 from 15 balls with two sixes to help Royals to a respectable total.

Given the new ball to start proceedings, Mayers did not disappoint his captain, as he started the demolition by bowling Johnson Charles with the fourth delivery of the innings for four.

Two balls later, Mayers had Mark Deyal caught for duck and then things would get worse for the Kings after Mayers rattled the stumps of Roston Chase for two to leave the St Lucia franchise in a pickle at seven for three in the third over.

Things would get even better for Mayers, as in the same over, he had Roshon Primus caught for a duck to leave the Kings in tatters at seven for four.

The inclement weather would then threaten to take away all the hard work which Mayers and the Royals had put in, however, after a 45-minute rain delay, play resumed with the Kings needing 93 runs in 30 balls.

Captain Faf Du Plessis and Joseph threatened to steal the contest with some swashbuckling hitting, however, the scenario proved too much in the end and the Kings fell short by 11 runs.