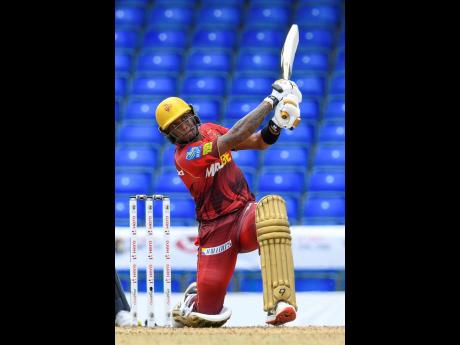 The Trinbago Knight Riders sustained a late burst from pacer Alzzari Joseph to secure a three-wicket win over the St Lucia Kings in the second game of the Caribbean Premier League (CPL) in Basseterre, St Kitts, yesterday.

Joseph bagged four wickets but the Knight Riders managed to get to 148 for seven in pursuit of 144 after the Kings managed to post 143 for nine in their allotted 20 overs.

Sent in to bat, the Kings found runs hard to come by especially after the early loss of opener Johnson Charles for just four runs.

Jamaican opener Leroy Lugg was able to get a boundary, but he too fell just before the end of the power play for just 13, bowled by Sunil Narine.

Mark Deyal and stand-in captain Roston Chase chalked up a mini recovery by adding 44 runs for the third wicket before Chase went lbw to Akeal Hosein for 19 at 76 for three in the 13th over.

Hosein would cap off a fine evening by picking up another three wickets, as the left-arm spinner finished with four wickets for just 13 runs in his four overs which kept the King's innings in check.

In reply, the Knight Riders lost Narine in the first over of the match, as he was brilliantly caught by Deyal off Jamaican left-arm spinner Jeavor Royal for just six runs.

Nicholas Pooran managed to get just four runs before he was removed by seamer Scott Kuggeleijn at 19 for two in the fourth over.

Tion Webster and Kiwi wicket-keeper Tim Seifert then went about the recovery mission, and the pair added 81 runs for the third wicket to set about the Knight Riders' victory.

Webster was in imperious form, slamming 58 runs from 45 balls with six fours and three sixes, however, his wicket prompted a mini-collapse somewhat, with the Knight Riders losing four quick wickets.

Pacer Alzzari Joseph sent back Andre Russell for five, Seifert for 34, captain Kieron Pollard for 17 and Seekkuge Prassana for one to leave the Knight Riders in a spot of bother at 142 for seven.

Anderson Phillip would then finish things off with a six in the final over to take the Trinidad franchise over the line and a valuable two points to kick-start their campaign.

In the Women's CPL encounter between the Trinbago franchise and Amazon women's franchise, the match ended in no result. The Knight Rider Women first got to 105 for six with Jamaican Natasha MacLean getting 20. The Amazon Warriors Women reached 13 without loss when rain ended play.