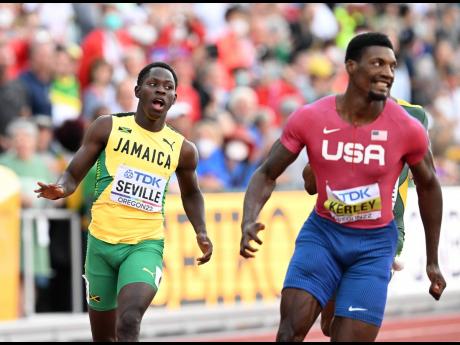 The only emotion that sprinter Oblique Seville had after the Saturday's 100m final at the World Athletics Championships on Saturday was pride in how much he has grown in his young career.

In his first major global championship final, Seville, the lone Jamaican in the field, finished fourth in 9.97 seconds. He finished behind an American sweep led by Fred Kerley who took the title in 9.86. Marvin Bracy was second in 9.88, while Trayvon Bromell took third also in 9.88.

It was the seventh consecutive time that Seville had gone under 10 seconds this year, in a season where he set a personal best of 9.86 in May at the National Stadium.

But Seville said that he was not concentrating on a medal, but rather on his technique, which he admitted fell short on the big stage. But he was not upset about missing out on podium place.

"I didn't have any medal on my mind," Seville said. "I was just focusing on execution, which was kind of poor. I'm not disappointed but I know what to do next time. But I am glad that I finished the race."

Seville made it to the semi-finals of the Tokyo Olympics last year, finishing fourth in 10.09 in his senior team debut. His first world championship 100m campaign started with an opening round win, defeating Tokyo Olympic champion, Lamont Jacobs of Italy, in 9.93, and Bracy in the semi-final in 9.90, continuing a 2022 season where for the first time he was going sub-10 seconds.

Despite his dealing with a toe issue, Seville was making no excuses.

"On these days, you can't let those things bother you," he said. "The only thing that changed in the final was my execution."

However, he says that he is pleased with how much improvement that he has made over the past two years and is looking forward to continuing his progress.