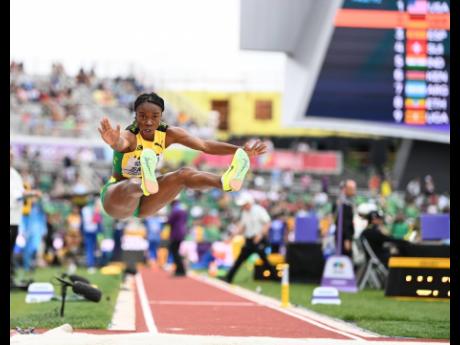 Jamaica’s Ackelia Smith competing in the Women’s Triple Jump qualifiers at the World Athletics Championships at Hayward Field in Eugene, Oregon, on Saturday.

As proud as national triple jumper Ackelia Smith is making her first senior global championship final. She says that she is not settling for just making up numbers.

Smith secured her place for the final with a personal best of 14.36m on her final attempt, joining Doha 2019 silver medallist Shanieka Ricketts and Kimberly Williams. It is the first time that three Jamaicans will take part in a major global championship final in the event.

Despite the experience gained in her first season at the University of Texas, Smith said that it could not have prepared her for facing athletes at the elite level, which had her momentarily star-struck.

"It didn't [help], because I was competing with collegiate athletes," she said. "This is different when you're seeing the persons that you look up to, watching their jumps. I was nervous, a little star-struck. But at the end of the day, I am here to compete."

Smith's rise follows a ninth-place finish in the World Athletics Under-20 Championship final in Nairobi, Kenya, last year. Her previous best jump was 14.08 in May, and at the National Senior Championships in late June, she finished second behind Ricketts at 13.93.

Smith said that it was Ricketts' counsel before her final attempt that helped her to focus and seize her moment.

"She was like, 'You got this. Just focus, just pretend that you are the only one there'," Smith said. "I was like, 'I got the same opportunity as everyone there and I just have to utilise it,' and I did just that."

Entering the championships, Smith had not thought about anything beyond her goal of extending her personal best. Now she says that she is setting her goals higher in the final, hoping to continue to surpass her limits.

"Even though the jump was good for me to get into the final, there were a few shaky parts of it that I need to work on," she said. "So I will work on that, fix it up, and get a personal best."