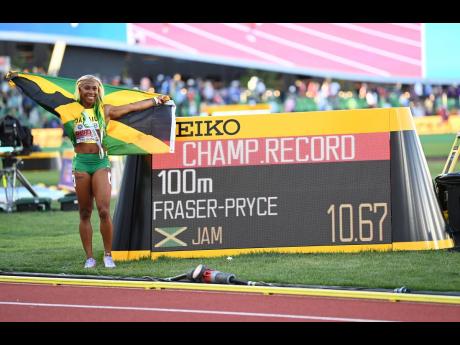 Shelly-Ann Fraser-Pryce poses with the stadium clock at Hayward Field, after setting a championship record of 10.67 seconds to win her fifth World 100m title at the World Athletics Championships in Eugene, Oregon, yesterday. 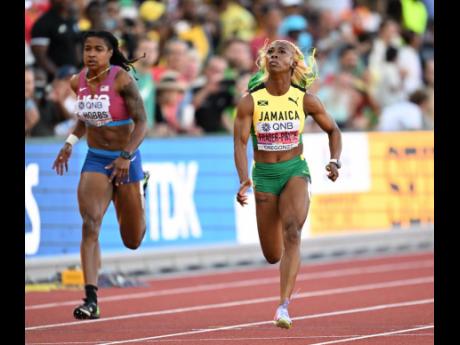 After securing her fifth World 100m title last night, Shelly-Ann Fraser-Pryce says that her competitive spirit has been her fuel to keep going at the age of 35.

Fraser-Pryce set a championship record of 10.67 seconds to defend the title, leading another Jamaican clean sweep. Shericka Jackson finished second in a personal best time of 10.73, while double sprint Olympic champion Elaine Thompson Herah was third in 10.81 seconds. It is the second consecutive year that Jamaica have swept the medals in a major global championship in the event, and the third overall.

Fraser-Pryce says that in spite of her age, her desire to be the best and to get even faster has not diminished.

"I believe that I can run faster and once I have that belief, I'm not going to stop until I do it."

Tokyo Olympic Games champion Hansle Parchment was forced to withdraw from the Men's 110m Hurdles final after suffering an injury minutes before the start of the race. Parchment had the second fastest time heading into the final, with 13.02. American Grant Holloway defended his World title with a winning time of 13.03. Orlando Bennett and Rasheed Broadbell failed to advance from the semi-finals.

Jaheel Hyde advanced to his first senior global championship final after finishing second in his 400m Hurdles semi-final heat, clocking 49.09. Shawn Rowe was not so fortunate as he finished eighth in 49.80, missing out on the final. Kemar Mowatt was also eliminated at the semi-final round, when he placed fourth in 48.59.

National champion Jevaughn Powell failed to qualify for the semi-finals of the men's 400m, clocking 46.42 to finish fourth in heat three, a time that was not good enough to advance as a non-automatic qualifier. Christopher Taylor ensured an automatic berth by finishing second in heat two, clocking 45.68. Nathon Allen also progressed, finishing third in his heat, clocking 46.61.

Jamaica women's team captain Stephenie-Ann McPherson, national champion Candice McLeod, and World Championships debutant Charokee Young all progressed to the semi-final of the women's 400m. McPherson had the fastest time among the qualifiers, winning a strong heat in 50.16, while Young clocked 51.84, finishing fourth in her heat but getting a non-automatic qualifying place. McLeod finished second in her heat in 50.76.

In the field, Traves Smikle and Fedrick Dacres advanced to the men's discus final, with first-round throws of 64.21 and 64.49m, respectively. Chad Wright, who arrived in Eugene on Saturday, did not advance to the final. His best effort was 60.31m.