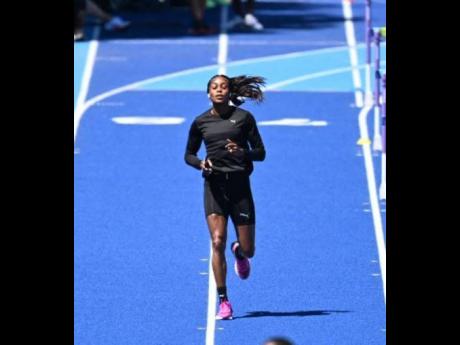 Five-time Olympic champion Elaine Thompson Herah says that her new deal with PUMA has not changed her focus or her drive to be the best female sprinter in history.

PUMA confirmed their partnership with Thompson Herah yesterday, ending her relationship with Nike.

Thompson Herah said that it was not an easy decision to leave Nike, however, she says that she is happy to be part of the team which includes her compatriot, many-times world and Olympic champion Usain Bolt.

"I am blessed to be a part of the PUMA family," she said. "It has been a long journey. The journey continues. It's the same Elaine Thompson Herah. I am just going to go out there and keep on doing the job that I love. Keep on performing and entertaining."

Thompson Herah says that she is not concerned about what role PUMA will have for her, but rather focused on cementing her place as the greatest women's sprinter in history.

"You have a lot of athletes who signed with PUMA and who are performing really great," she said. "So that is on their side to tell if I will be the face but I will continue to do my job and do my work on the track, and the keep dominating and to be the greatest female sprinter of all time."

Thompson Herah will begin her chase for a maiden world title when the Women's 100m heats begin on Saturday and she says that she is pleased with her fitness so far.

"I am just keeping it safe right through the championships and I am feeling good so far. So no niggles, no pain," she said.

PUMA's chief executive officer, Bjorn Gulden, says that they want to do whatever they can to assist Thompson Herah to break the women's 100m world record.