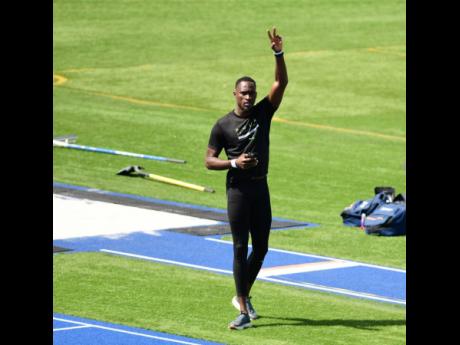 Olympic Games and national 110m hurdles champion Hansle Parchment during a training session at Lane Community College in Eugene, Oregon, yesterday, ahead of the start of the World Athletics Championships tomorrow.

Don't expect Hansle Parchment, Jamaica's men's team captain for the World Athletics Championships, to be a mannequin for Shelly-Ann Fraser-Pryce to prepare her wigs this time around.

However, it is those moments, and fierce battles on EA Sports' FIFA with his teammates that he said are critical to the camaraderie of the group, as they hope for back to back double digit medal tallies when Team Jamaica takes to Hayward Field tomorrow.

The videos of Parchment and sprinter Oblique Seville acting as mannequins at the Tokyo Olympics last year as Fraser-Pryce prepared her hair for the championships caused banter on social media. While all in good fun, he said that he is appreciative of such light moments.

"I can't say if that definitely will happen again," Parchment jokingly told STAR Sports. "[But] it is always good to have a good vibe in the camp, especially when it is coming closer to serious competition. We want everybody to be calm, relaxed, not anxious, or worried. I feel like things like those allow people to keep calm."

Parchment said the competitiveness of the games on FIFA helps to get the team in the right frame of mind for their events. Discus thrower Traves Smikle and 200m sprinter Rasheed Dwyer are two names he mentioned playing against, among other athletes.

Parchment compared it to how he approaches the hurdles.

"I think everybody is getting beaten by everybody," he said. "It is almost like the hurdles. It can be unpredictable. Sometimes you are winning, sometimes you are losing. It is all part of it. [But] even when you are not playing, people come around to see what is happening, and that is a good vibe for the camp."