Windwards too difficult for Ja U19 Women 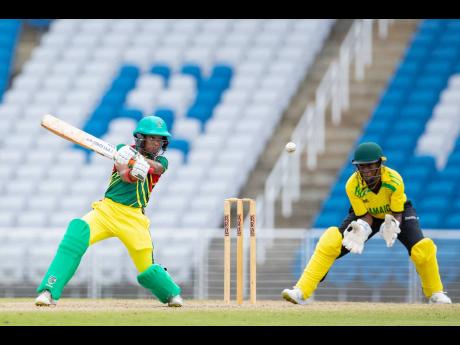 This result follows back-to-back abandoned games against the hosts and the Leeward Islands because of rain.

After taking first strike, Jamaica totalled 96 for five in their 20 overs, after starting well with openers Breanna Gordon (11), and Tasha-Gaye Gordon (15) putting on 41 for the first wicket.

When Breanna was run out by Jannillea Glasgow in the eighth over, that wicket prompted a mini-slide as they lost two more for just six runs at 47 for three.

Chrishana McKenzie came in and hit 20 from 31 balls, while Gabrielle Bryan scored 13 not out to inch the Jamaicans close to the 100 mark.

Neisha Cherry took two wickets for 10 runs for the Windwards, who eased to their target at 97 for two in 15 overs and three balls, from an unbeaten knock of 52 from captain Zaida James. Namiah Marcelin contributed 18 not out, despite two wickets for Kimarie Campbell.

In the other encounter at the BLCA, T&T defeated Guyana by 40 runs. T&T were first bowled out for 69 in 13 overs and a ball, then Guyana were blown away for just 29 runs in nine overs and five deliveries, with Shalini Samarro bagging three wickets for seven runs.

Barbados defeated the Leewards by 49 runs in another fixture, at the Diego Martin Sports Complex. Barbados first put up a formidable score of 172 for four in their 20 overs, with Asabi Callender scoring an unbeaten 44 from 41 balls and Trishan Holder getting 36.

The Leewards in reply could only manage 123 for six, with opener Kimberly Anthony top-scoring with 36.