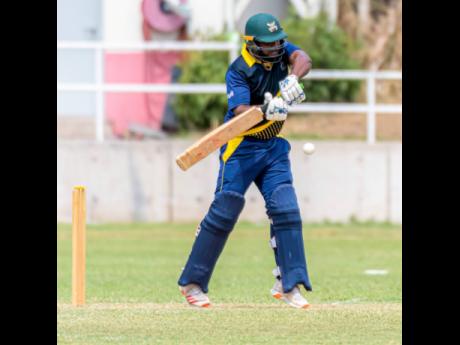 Man-of-the-match Dennis Bulli, of the Jamaica Defence Force, plays a shot on the way to his top score of 35 against St Mary in the Jamaica Cricket Association 50-over final at Sabina Park in Kingston on Saturday.

The Jamaica Defence Force (JDF) won the Jamaica Cricket Association 50 Over Championship with a two-wicket win over St Mary at Sabina Park in Kingston on Saturday.

St Mary, the defending champions, were asked to take the first strike and posted 159 all out in 37 overs and three balls, thanks to effective spin bowling from national player Dennis Bulli who picked up four wickets for 30 runs from his 10 overs.

Bulli got good support from Oshane Williams, who took two wickets for 23 runs, despite a battling 72 from national batsman Alwyn Williams, who top-scored with 72 from 83 balls.

Williams and captain Andre Creary put on 93 runs for the third wicket before Creary was caught by Gordon Bryan off Bulli for 26, with the score on 129. Williams was run out in the next over by Bryan after facing 83 balls, and hitting nine fours and two sixes.

That wicket prompted a slide as St Mary lost six wickets for 29 runs.

JDF were in early trouble at 21 for three in the run chase, with pacer Jermaine Chisholm removing opener Tevin Gilzene for nine, and then left-arm spinner Tyrone Daley trapping Carl Reid, and Kevin Daley in front for six and one run, respectively.

Deethmar Anderson and Bulli then set about the recovery, and they put on 78 runs for the fourth wicket, before Man-of-the-Match Bulli went to Daley for a top score of 35.

Anderson went for 34 in the next over to leave JDF on 101 for five, but captain Leighton Leslie (23) and Marlon Saunders (21) took them closer to victory.

Gordon Bryan, with 12 not out, and Tyrone Burton, one, saw them over the line at 163 for eight in 40 overs and three deliveries.

Winning captain Leslie was pleased that his charges could secure the limited-overs title after last winning it in 2011.

"To see how the guys came on during the season is tremendous," he said. "We learnt from our mistakes and we sat down and reflected and decided we were going to play hard cricket. To see us reaping the rewards at the end of the tournament is a great feeling."

"We didn't bat the way how we wanted and after the fall of my wicket, we started to slide," he said. "When you lose so many wickets in clusters for so few runs, that was the main downfall of our defeat."