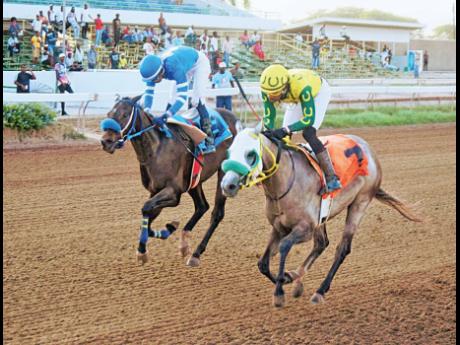 DaCosta, well clear of Nunes in this year's stakes race after narrowly losing to his rival last season, teamed up with champion jockey Anthony Thomas to dominate the programme.

The DaCosta-Thomas combination opened the programme with an easy winner, 1-5 favourite, SHE'S MY DESTINY.

Thomas, who started the afternoon on 47 winners, one behind challenger Dane Dawkins, romped the five-and-a-half furlong event, guiding home SHE'S MY DESTINY under a hand ride, making every post a winning one to clock a fast 1:06.0 on the resanded surface.

Dawkins briefly poked his head in front after being joined by Thomas, outfinishing his rival aboard LONGIE LALA, beating CONUNDRUM by a length and quarter in the fifth.

However, Thomas jumped to 50 with back-to-back wins aboard DaCosta's MIDNIGHT BLUE and IT'S A BOY in the sixth and seventh events, respectively.

MIDNIGHT BLUE, sent off at a king's ransom of 2-1, returned off a near one-year break to make all at five furlongs straight against non-winners of two races, using her back class to run away from horses who she was leagues ahead of a year ago.

IT'S A BOY, third last time out behind T BRADY at six and a half furlongs, showed his appreciation for the added furlong in the seventh, swooping down into contention wide at the top of the straight before quickening to go by rivals at odds of 7-2.

Nunes, whose FURTHER AND BEYOND, and Jamaica Two-Year-Old Stakes winner, GOLDEN WATTLE, helped him overhaul DaCosta to claim a third straight trainer's title last season, is hopelessly behind his rival in stakes this season but continues to plug on, using DEVONTE to stun rivals in the closing event for three-year-old maidens.

The grey colt broke sharply with Tevin Foster but was circled by speedy LAST BID, who he tackled early in the straight to beat in a driving finish, clocking 1:16.2 at six furlongs.