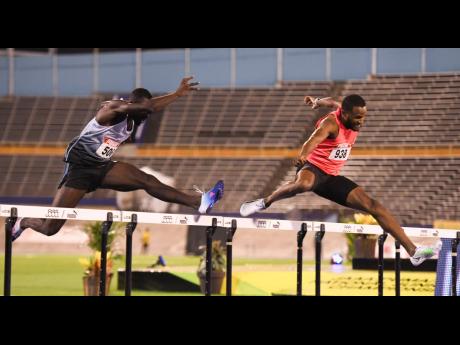 Jaheel Hyde (right) forces Akeem Mowatt to keep up with him in the men’s 400m event at the JAAA National Senior Championships at the National Stadium in Kingston on Friday, June 24.

Hyde is targeting his first major individual championship final in a season that started slowly but has improved, after winning his third national title at the JAAA National Senior Championships last month.

Hyde is in his third year with the club and Stewart says that his ability to be coached, and becoming a father, has sharpened his focus and improved his performances in time for the Championships.

"He is a student of the game," Stewart said. "He is always willing to learn. He always wants to be better and he listens well. He is a mature guy, he is a responsible guy. He has a family to take care of and as such he is more grounded and heading in the right direction."

Stewart said that the challenge this season was the effects travelling had on Hyde's performances with his first three events taking him to Doha, Qatar; Eugene; and Rabat, Morocco. Despite finishing fifth in the Wanda Diamond League meets in Doha and Rabat, and seventh in Eugene, Stewart said that he was concerned about Hyde's ability to improve.

"We anticipated him going faster this year, but he has been invited to a lot more international meets," Stewart said. "We had to make adjustments to facilitate these. His times wouldn't have been what we expected, but we know that the work has already been put in. We are not worried and we are just taking it each step as it comes."

Hyde clocked a season's best of 48.51 seconds to win the national title, the 10th fastest time in the world this year. Stewart says with Hyde's form and health in projected ranges, he expects that he will continue to take another step forward at the World Championships.

"The aim is always to focus on your lane, focus on your execution, and believe in your training and yourself and to go out there and perform," Stewart said.

The World Championships begin on July 15.