Record for Williams at Junior Trials 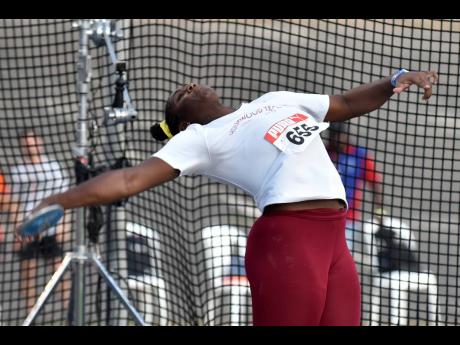 Cedricka Williams' third consecutive Under-20 Girls discus win of the season translated into a record-breaking one, highlighting the opening day for the juniors at the JAAA National Championships at the National Stadium on Thursday.

Williams of Holmwood Technical set a national junior record of 56.21m with her fourth attempt. Abigail Martin of St Jago High was second with 51.13m on her final attempt while Britannia Johnson of Camperdown High was third in 47.32m.

Williams's effort erased the six-year-old mark set by Shanice Love (54.72m) in 2016. Williams's national title follows her winning the Carifta Under 20 Girls title, and the Penn Relays crown in April.

St Jago's Machaeda Linto won the Under-20 girls triple jump crown with a distance of 12.93m on her first attempt. Jade-Ann Smith of Excelsior was second with 12.20m, while Sherika Christie of Hydel was third with 12.06m.

Sheniela Williams of Edwin Allen captured the Under-20 Javelin Throw title with a distance of 34.78m, although she fell short of the World U20 Championships automatic qualification mark of 50.00m. Daina Morrison of Excelsior High finished second with 31.30m and her teammate Teiolla Harvey was third with 27.37m.

Ten finals will be contested today among the juniors, which include the Under-20 Girls 100m as well as the Under-20 Boys 100m final.