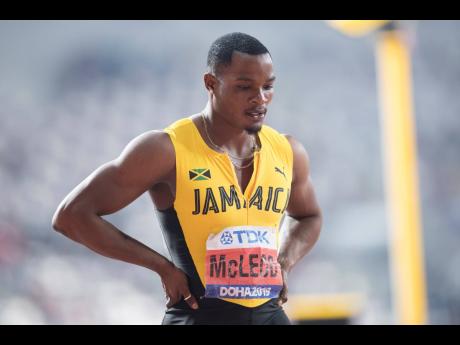 Jamaican athletes had mixed results at Diamond League meet in Oslo, Norway yesterday, and saw former World and Olympic champion Omar McLeod withdraw from the meet days before the start of the National Senior Championships (Trials) next weekend.

McLeod was scheduled to face American Devon Allen in the men's 110m hurdles but did not face the starter. No official reason was given for his late withdrawal. McLeod has competed in three 110m hurdles races this season, his last being in May at the Diamond League meet in Birmingham, England, where he clocked 13.17 seconds, which is a season's best. Allen, running into a headwind (-1.2 metres per second), won in 13.22.

Tokyo Olympics 400m finalist Christopher Taylor finished third in the men's 400m clocking 45.52, 0.07 seconds outside of his season's best time of 45.45 which he set on June 6 in the Netherlands in a second-place finish. The race was won by former Olympic and World champion Kirani James of Grenada, who clocked 44.78, while Botswana's Isaac Makwala finished second in 45.45. Taylor has competed in three 400m events so far this season, and has finished in the top three on two occasions.

World championship silver medallist Danniel Thomas-Dodd had to settle for fourth place in the women's shot put, failing to improve on her first attempt of 19.04m. American Chase Ealey won the event with 20.03m, a personal best, while Jessica Schilder of the Netherlands set a personal best and national record of 19.46m. Thomas-Dodd has yet to place in the top three in her two meets outside of the United States this season, placing fifth in the Diamond League meet in Doha on May 13.

Four-time World 100m champion Shelly-Ann Fraser-Pryce will compete in the Diamond League meet in Paris on Saturday, the final meet before Trials. Fraser-Pryce's 10.67 clocking in May is still the fastest time in the world this year.