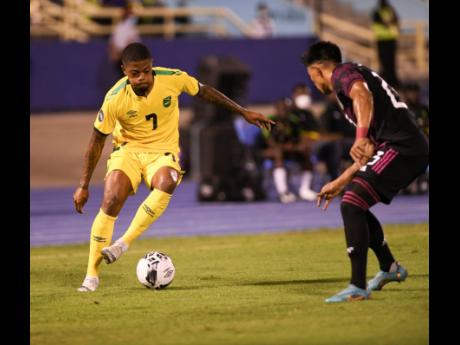 Jamaica’s Leon Bailey (left) takes on Mexico’s Jesus Gallardo during their Concacaf Nations League match at the National Stadium in Kingston on Tuesday.

After turbulent circumstances off the field professionally and personally, national winger Leon Bailey says Jamaica's senior men's football team's recent performances are signs that they are moving in the right direction.

The Reggae Boyz drew 1-1 with Mexico in their Concacaf Nations League game on Tuesday, keeping them first in the group and qualifying them for the Concacaf Gold Cup next year.

The performances follow more tension with the Jamaica Football Federation as the players demanded the resignation of general secretary Dalton Wint after mismanaged travel arrangements for a trip to Suriname earlier this month. The players seemed to get their wish but Wint has not submitted the resignation letter he promised.

Bailey, who scored in the fourth minute, dedicated the goal to his son, Leo, who celebrated his third birthday that day. He says this was a special moment for the family.

It came a week after his mother, his partner Stephanie Hope, Leo, and his friend Kevaughn Atkinson were involved in a car crash hours before Jamaica were to play Suriname on June 7.

While counting his blessings, Bailey says that he is also grateful to the crowd at the National Stadium on Tuesday. He says it is the same energy that will be needed to facilitate what he hopes will be a new era for the team.

"To be able to create so many opportunities against Mexico, getting a point out of this game, it shows that we have ways to go and we are doing well, moving forward as a team," Bailey said. "And I think this is what we need going forward, and we will continue to build."

Bailey says that they intend not to take the fan support for granted with off-the-field tensions dying down, repeating his stance from last week after the Suriname game that "good things are happening" inside the camp.

"I think we gave them a performance to really show them that we are grateful for them to be here in the stadium, and hopefully they come out every game, every time we are playing here," he said. "We definitely need it, moving forward, because we are making a change."

Jamaica will face Mexico next year to decide who advances to the Concacaf Nations League semi-finals.